SEOUL, June 6 (Yonhap) -- Kim Ji-woo (alias), a 36-year-old office worker, found herself near the end of the line to get a COVID-19 vaccine, as she is not among the groups that are prioritized in the country's nationwide inoculation plan.

But she learned that the newly-launched "leftover" vaccine booking system was a way for her to "cut in line" and get the vaccination that would allow her to gradually return to normal life.

Anybody older than 30 who is not yet officially eligible to receive vaccine shots can sign up to get the so-called no-show doses of AstraZeneca COVID-19 vaccines either through the internet portal Naver or top mobile messenger KakaoTalk.

Mindful of missing out, Kim hurriedly logged onto the vaccine reservation system on her smartphone as soon as it opened in late May, and was able to make an appointment to receive an AstraZeneca vaccine at a small clinic on the outskirts of Seoul.

"I knew from previous experience that slots get filled up within a matter of seconds," Kim said. "I had to target hospitals located far away and was faced with long queues. However, it was all worth it."

The ambitious pilot system kicked off on May 27 as health authorities sought to speed up the vaccination rate and save vaccines from being wasted, utilizing the country's strong IT infrastructure and tech prowess.

An accumulated 7.45 million people had been administered with their first shots of the vaccines against COVID-19 as part of the vaccination campaign that kicked off on Feb. 26, accounting for 14.5 percent of the country's 52 million population.

The vaccination rate started tepidly but has recently picked up, yet the country still ranks fourth from the bottom in vaccination rate among 37 member states of the Organization for Economic Cooperation and Development, followed by Japan, New Zealand, and Australia.

"Digital technologies can play a critical role in delivery, monitoring, and management of the vaccination plan," Park Hyun-kyu, an official at the Korea Disease Control and Prevention Agency (KDCA) said. "Indeed, there are many tools either adopted or under development."

One AstraZeneca vaccine bottle contains 10 doses. If they are not used within six hours after opening, the remaining doses must be discarded, according to KDCA protocol.

"An average of three, or a maximum of only five people, can sign up for such no-show vaccines every day ... which is not a lot," said a nurse surnamed Kim at a hospital in Gwacheon, just south of Seoul. "Still, it is meaningful as leftover shots do not go to waste."

"The implementation of this innovative digital tool is unique to South Korea," said an official surnamed Kim from Kakao Corp., which operates Kakao. 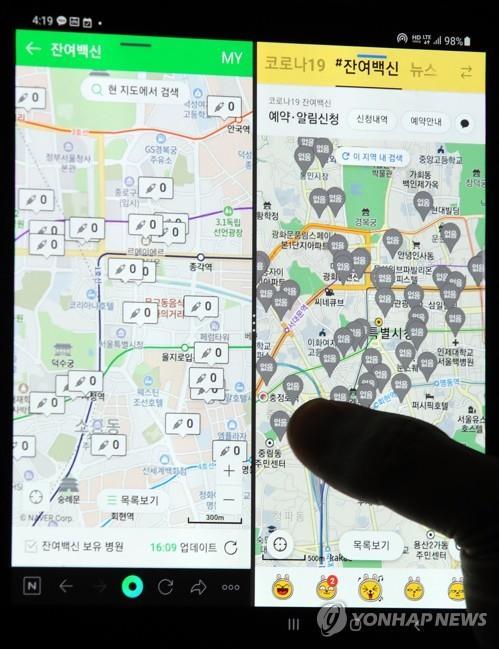 SK Telecom Co., the country's largest mobile carrier, is planning to introduce an artificial intelligence (AI) platform within the third quarter that informs the vaccination schedule to each individual.

By joining hands with the KDCA, the system, dubbed NUGU Vaccine Carecall, will notify the inoculation day for each person and monitor any side effects after receiving the shot.

The company already adopted an AI platform called Nugu Carecall, which is designed to help remote monitoring of elderly people in quarantine.

The system can monitor isolated senior citizens for words that could suggest the need for a visit by a healthcare professional.

SK Telecom said such AI systems decrease the workload of healthcare workers in the field so that they can focus on more urgent tasks, such as monitoring patients in critical condition.

SK Telecom said NUGU Carecall made around 1.3 million calls to some 120,000 people since the launch in May 2020, which resulted in an 85-percent decrease in monitoring tasks by healthcare workers.

Naver adopted a similar platform, called CLOVA Carecall, by utilizing its AI -- CLOVA -- that makes an automatic calls to vaccine recipients for up to three days to monitor for side effects.

Local biopharmaceutical firms have joined a race to utilize various IT technologies in developing indigenous COVID-19 vaccines and treatments, which have been cited as key to the successful fight against the pandemic.

Small biogenetics firm Theragen Etex has utilized its unique AI technology to expedite the search for not only promising treatments for COVID-19 but also to design a vaccine model that can be used for other infectious diseases in the future.

Its AI predicts the immunogenic landscape of COVID-19, leading to universal blueprints for vaccine designs and developments, the company said, adding that it is in talks with other bio companies from both home and abroad to commercialize the model.

Another biotech firm, Synteka Bio, said it is using AI and genome big data to expedite the search for promising treatments for the COVID-19 virus.

"Many local firms besides Synteka Bio are currently developing new drugs (against the COVID-19 virus) by using AI ... we hope to reach a meaningful result in the near future," said Yang Hyeong-jin, a Synteka Bio official. 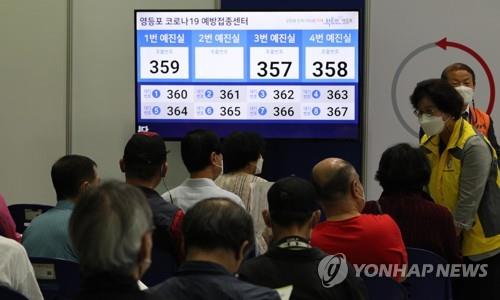