SEOUL, June 3 (Yonhap) -- The parcel delivery workers' union claimed Thursday logistics companies have not properly carried out an agreement made early this year to prevent overwork.

The country's leading logistics firms agreed in January to take responsibility for sorting parcels, blamed for couriers' long workhours, promising additional workers, extra payment and automatization for the job. The deal was reached after 16 delivery workers died last year apparently due to overwork.

"(Some companies) have not provided additional workers to sort parcels, while some others did but made the couriers shoulder the cost," the union and the progressive Jinbo Party said in a news conference. 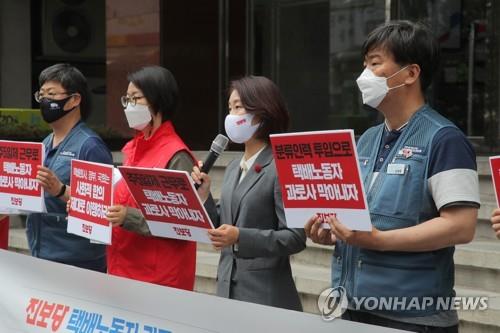 An inspection team has examined branches of major companies, including CJ Logistics Co., Hanjin Transportation Co. and Lotte Global Logistics, across the country on 314 occasions to check their implementation of the agreement.

The team found that workers at branches without a labor union did not even know about the agreement.

"We condemn the government and logistics firms, which are still driving delivery workers to death from overwork," the Jinbo Party said.

The delivery workers' union and the companies plan to hold further talks to prevent overwork this month.