DAEGU, June 3 (Yonhap) -- Daegu, a southeastern city hit hard by massive coronavirus outbreaks during the first wave of the pandemic last year, will raise its social distancing measures by one notch to Level 2 this weekend to cope with increasing local transmissions of COVID-19 and its variants, the municipal government said Thursday.

The Level 2 scheme, the third highest in the country's five-tier COVID-19 alert system, will take effect at midnight Friday and last until June 20, the government said, noting the operating hours of facilities used by the general public will be curtailed and gathering limits will be imposed under the new rules. 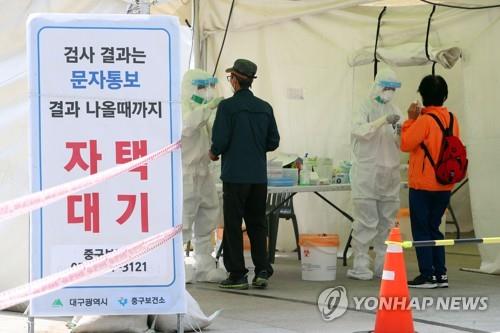 The city had upgraded its social distancing posture to Level 2 on Dec. 8 last year before lowering it to Level 1.5 on Feb. 15. Municipal officials said the planned return to Level 2 is inevitable due to a recent spike in cluster infections and the rapid spread of coronavirus variants.

Between February and March last year, Daegu reported the nation's first large outbreak of COVID-19 tied to a minor religious sect, reporting about 7,500 confirmed cases and around 200 deaths for the year.

The city with a population of 2.43 million reported 74 additional cases Thursday, raising its cumulative caseload to 10,071. The daily number of infections had been below 50 over the past month. The Thursday tally is the largest daily figure since March 19 last year, officials said, adding 19 of them are tied to an entertainment bar.

Cluster infections have also been reported at religious facilities and workplaces, and cases of virus variants are also on the rise, prompting quarantine officials to warn about a new wave of the pandemic in the near future.

"Recently, about half of the confirmed cases in Daegu have a variant virus. There are studies showing that mutated viruses have strong transmission power and are more toxic than existing viruses," said a doctor at the Yeungnam University Medical Center.

He then suggested that the vaccination rate be raised sharply, as current COVID-19 vaccines are deemed effective against most variant viruses.

According to municipal officials, restaurants and cafes in Daegu will be forced to close from 9 p.m. to 5 a.m. the following day under Level 2. Gatherings and events involving 100 or more people will be banned in principle. National and public facilities will be restricted from accepting more than 30 percent of their full capacities, while sports events will be allowed to operate at 10 percent capacity.