He delivered the message to President Moon Jae-in during their half-hour phone conversation, according to Moon's spokesperson Park Kyung-mee.

Johnson is scheduled to host the Group of Seven (G-7) summit in Carbis Bay, Cornwall, on June 11-13. Taking part will be the leaders of other G-7 members states: the United States, Canada, France, Germany, Italy and Japan. Moon has been invited to the session as a guest.

Speaking to Johnson, Moon said South Korea would participate actively in the G-7's discussions on efforts to resolve such issues as the pandemic, economic recovery and climate, Park said. 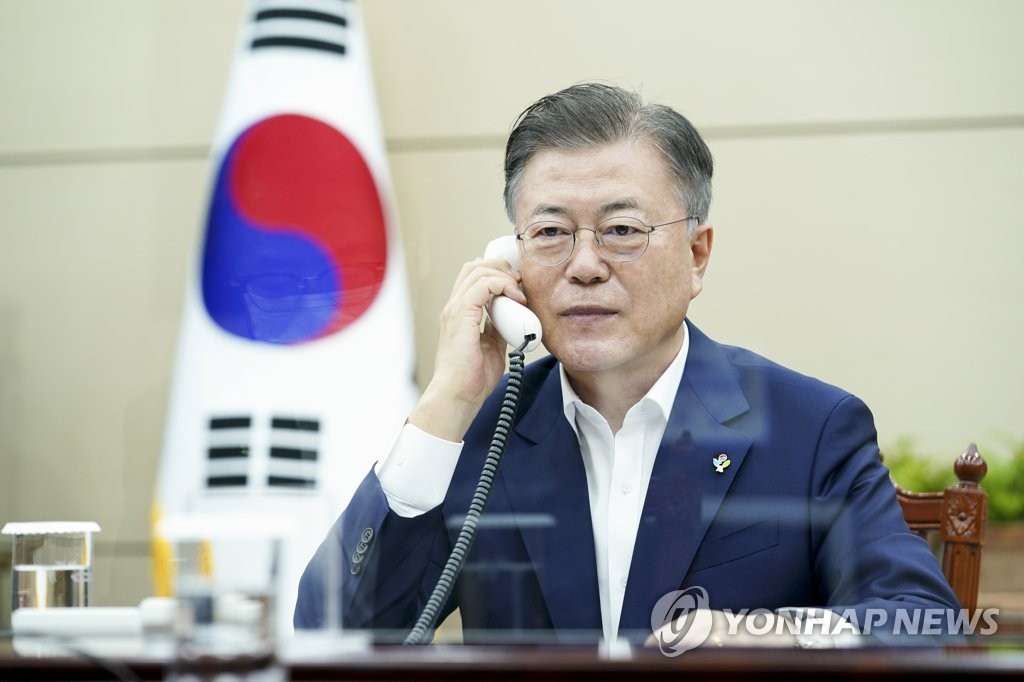 The prime minister hailed Moon's acceptance of the invitation and expressed hope for his role in "expanding the scope of discussions" in the summit by providing various points of view, she added.

Johnson stressed that South Korea is an important partner of his country, as shown in its recent investments there in digital and green projects.

He then requested that the South Korean government pay attention to the issues of the Global Partnership for Education (GPE) and girls' education, in which Britain is particularly interested.

Moon said he expects an agreement will be reached in the G-7 session on "substantive" ways for overcoming the coronavirus and preparing for future pandemics.

"To that end, it is important for all nations to strengthen their healthcare-related capabilities and establish a transparent and sustainable global healthcare governance," Moon was quoted as saying.

He thanked Johnson for joining the P4G Seoul Summit on climate and sustainable growth hosted by South Korea earlier this week.

Moon reaffirmed that South Korea will play a bridging role between advanced and developing nations in response to climate change.

On regional security, Moon said South Korea will continue efforts for the denuclearization of Korea and the establishment of permanent peace. He asked Britain to keep backing Seoul's initiative as a standing member of the U.N. Security Council.

Johnson said Britain will explore ways for North Korea to return to dialogue at an early date, the Cheong Wa Dae spokesperson said.

The prime minister requested the phone talks for preparatory consultations in advance of the G-7 summit.