SEOUL, June 6 (Yonhap) -- The Tripitaka Koreana, a collection of Buddhist wooden printing blocks, will open to the public every Saturday and Sunday starting later this month.

They are stored at Janggyeong Panjeon in the Haein Temple, in Hapcheon, 354 kilometers south of Seoul. The storage hall was listed as a UNESCO World Heritage site.

According to the Haein Temple on Thursday, a tour program will begin on June 19, allowing people to look around the inside of Janggyeong Panjeon two times a day, at 10 a.m. and 2 p.m. on Saturdays and Sundays.

People should make online reservations to join the 50-minute tour, and a maximum of 20 people will be allowed for each time slot.

The temple said it is the first time that the Tripitaka Koreana, a National Treasure included on the UNESCO Memory of the World Register, is being opened to the public since its production in the 13th century. 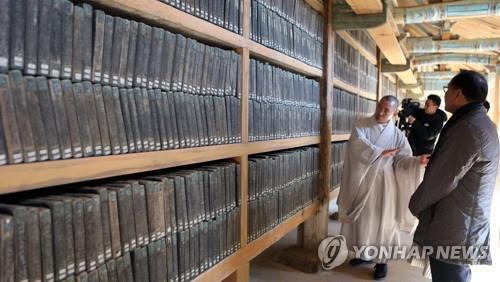 Tripitaka Koreana to open to public for first time

Tripitaka Koreana to open to public for first time