Lee came in fourth place in the Gallup Korea poll that canvassed public opinion for next year's presidential election, winning 3 percent of support.

The poll was conducted on 1,003 voters from Tuesday-Thursday and has a confidence level of 95 percent with a margin of error of plus or minus 3.1 percentage points.

Gyeonggi Province Gov. Lee Jae-myung, affiliated with the ruling Democratic Party (DP), garnered 24 percent of support to claim the lead ahead of Yoon Seok-youl, a former prosecutor general who has been neck and neck with the DP-affiliated governor in recent polls. Yoon had 21 percent of support.

Lee Jun-seok's surprise ascent in the presidential poll put several high-profile presidential hopefuls further on the fringe. Ahn Cheol-soo, the leader of the conservative minor People Party, came in fifth with 2 percent of support, followed by former Prime Minister Chung Sye-kyun and five-term conservative lawmaker Hong Joon-pyo, both with 1 percent, according to the poll.

Gallup Korea attributed the young politician's rise to the massive spotlight he has received recently for winning the primary for the PPP's upcoming election for the new party chairman.

In a separate opinion poll released earlier in the day, Lee was leading his big-name senior rivals by a wide margin in the PPP leadership race. 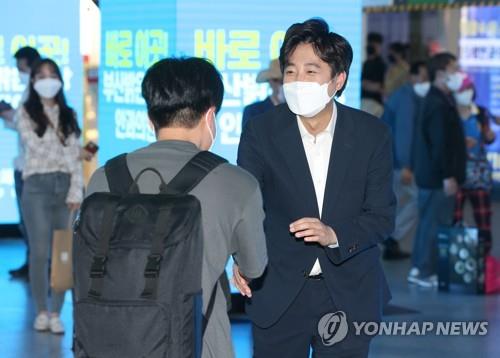 According to the poll conducted on 1,044 adults by R&Search on Tuesday-Wednesday, Lee came in as the most favored candidate for next week's election to pick the new PPP chairman, with 46.7 percent of support.

Former four-term lawmaker Na Kyung-won and incumbent five-term Rep. Joo Ho-young, both of whom served as party floor leader, were lagging far behind, with support ratings of 16.8 percent and 6.7 percent, respectively.

The poll, commissioned by Maeil Business Newspaper and its affiliated broadcaster MBN, has a margin of error of plus or minus 3 percentage points at a 95 percent confidence level.

In the primary on May 28, Lee, the youngest-ever contender for the command of the biggest conservative party, won a surprise victory, putting the established senior rivals on edge.

The PPP is slated to pick its new chairman at a party convention next Friday through two votes -- one by party members with a 70 percent weight and the other by private citizens for the remaining 30 percent.

Speaking up on controversial issues, such as the abolition of affirmative action for women, Lee has marked himself as a reform-minded politician, luring young, mostly male, voters to his campaign.

A Harvard graduate, Lee made his political debut in 2011, at the age of 26, joining the emergency leadership committee of the main opposition party, then named the Grand National Party, led by the impeached former President Park Geun-hye at the time.