According to the festival's 2021 official lineup announced Thursday, "In Front of Your Face" was listed in Cannes Premieres, a new section dedicated to works from well-established filmmakers.

Hong was invited with nine other filmmakers, including Arnaud Desplechin of "Deception," Mathieu Amalric of "Hold Me Tight," Andrea Arnold of "Cow" and Charlotte Gainsbourg of "Jane Par Charlotte."

"Hong Sang-soo is one of the most prolific moviemakers of today's cinema," artistic director Thierry Fremaux said during the announcement. "His selections are very minimalist and personal movies. They are creative, inspiring and crystallizing something that shaped today's cinema."

"In Front of Your Face," in which Hong played the roles of director, screenwriter, cinematographer, editor and composer, is the director's 11th entry to Cannes, marking the most among Korean directors.

"Claire's Camera" (2017) was included in the Special Screenings category, while "Like You Know It All" (2008) was screened during the Directors' Fortnight program.

This year's event will take place in the French resort city of Cannes from July 6 to 17. 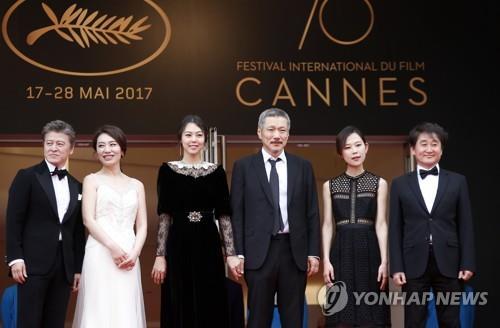