During the meeting at Chung's official residence, the senators -- Tammy Duckworth (D-IL), Chris Coons (D-DE), and Dan Sullivan (R-AL) -- said that last month's summit between President Moon Jae-in and U.S. President Joe Biden demonstrated the alliance and global cooperation partnership between the two countries, according to the ministry.

They also reaffirmed continued congressional support for the development of the alliance, the ministry said. 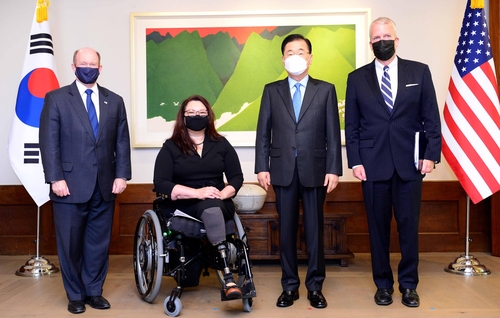 Chung told the senators that the leaders' summit has helped cement the alliance into one that is "comprehensive, constructive and mutually beneficial."

He asked for the continued congressional support for Seoul's peace efforts with North Korea.

The minister also asked for their keen attention on South Korean businesses in America and support for expanding the visa quotas for South Korean professionals, the ministry said.

Later in the day, Defense Minister Suh Wook also met with the senators and discussed ways to cooperate for denuclearization of the Korean Peninsula and the establishment of a permanent peace, according to the defense ministry.

Suh said the Korea-U.S.alliance and the combined defense posture are stronger than ever before, and expressed gratitude for the congressional support and the senators vowed continued backing for peninsula peace and the alliance, the ministry said.