The country's leading logistics companies agreed in January to take responsibility for sorting parcels, blamed for couriers' long work hours, promising additional workers, extra payment and automatization of the job. The agreement involving the workers' union, companies and the government was reached after 16 delivery drivers died last year apparently due to overwork. 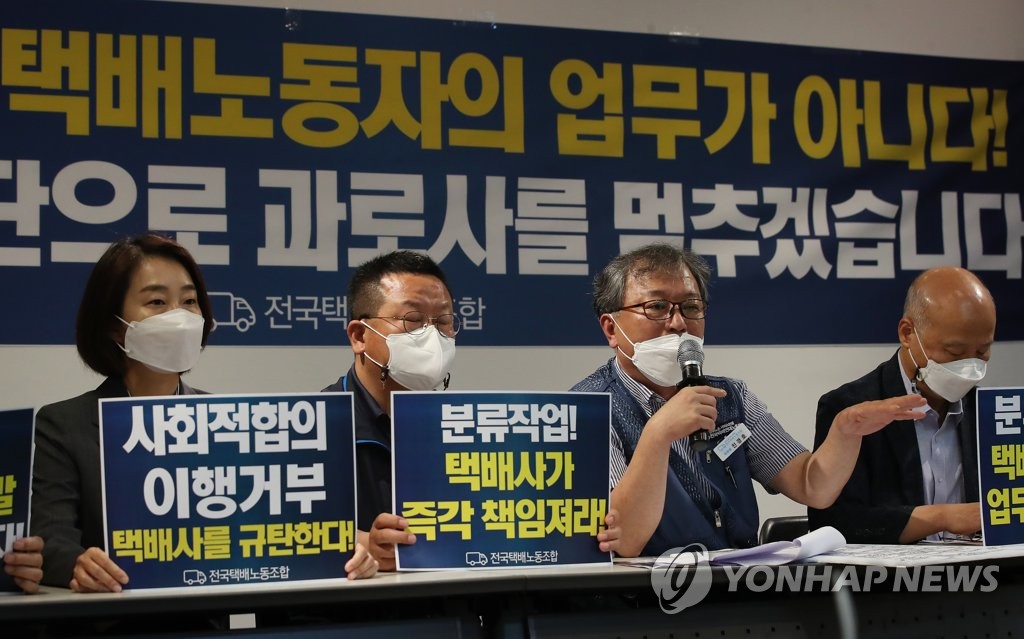 The three sides are conducting further talks on the timing of the full implementation of the January deal and additional measures, including couriers' demand for a five-day workweek, reduced workload and increased fees.

The Parcel Delivery Workers' Solidarity Union claimed the companies failed to deliver their promise to inject sorting workforce and are trying to postpone its implementation by one year.

The 6,500-strong union announced that beginning Monday, all its members will delay the start of work by two hours by reporting to work at 9 a.m. and departing for delivery at 11 a.m.

"It is designed to reduce working hours by showing up for work two hours late and have delivery workers only deal with items already classified," Kim Tae-wan, deputy chief of the union, said during a news conference in Seoul.

The union announced the result of its survey of 1,186 couriers conducted this week, in which 84.7 percent said they still sort parcels and 30.2 percent said the companies did not provide any additional workers for the work.

The union also claimed the companies pocketed most of the additional profits from the hikes in delivery charges as a result of the January agreement.

"The shipping charge of CJ Logistics Co. rose by 150 won (US$0.13) in May compared to January and February while fees for workers increased only 8 won," the group said.
(END)