Lee's promotion, in spite of accusations against him, is widely seen as part of the ministry's efforts to retain pro-government officials in important posts.

He was replaced by Lee Jung-soo, director of the justice ministry's prosecution bureau who is known to be close to Justice Minister Park Beom-kye.

Lee Sung-yoon is accused of exercising undue influence in 2019 to stop an inquiry into the allegedly illegal exit ban imposed on former Vice Justice Minister Kim Hak-ui who was under investigation over sexual misconduct allegations.

A whistle blower has claimed the travel ban enforced by the justice ministry did not follow due procedures and that Lee, then head of the Supreme Prosecutors Office's anti-corruption team, pressed investigators at the Suwon prosecutors office to drop the case.

Han Dong-hoon, a close aide to former Prosecutor General Yoon Seok-youl who resigned earlier this year amid feuds with the ministry, was appointed as vice president of the Institute of Justice, although Prosecutor General Kim Oh-soo is said to have requested that Han return to the prosecutors office.

The ministry made new appointments for a total of 41 senior prosecutors, which will go into effect next Friday. 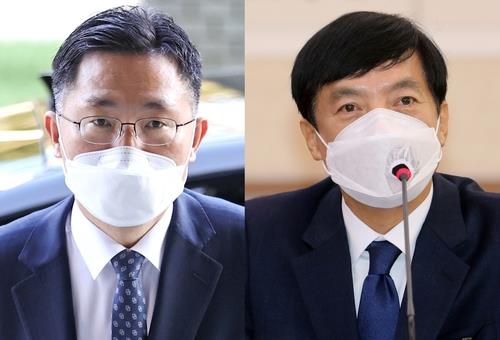