SEOUL, June 6 (Yonhap) --The chairman of the ruling Democratic Party (DP) on Sunday hinted at the potential parole of Lee Jae-yong, the de facto head of Samsung Group.

Business conglomerates have recently called for Lee to be pardoned, especially ahead of the Aug. 15 Liberation Day, an anniversary on which South Korea's presidents have often used their right to grant a special pardon as part of efforts for promoting national unity. 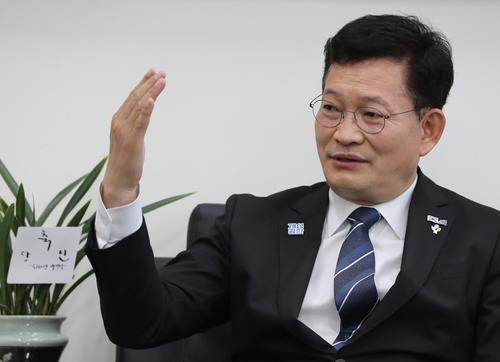 "(Lee) could possibly be freed on parole, not limited only to a pardon," Rep. Song Young-gil said during an interview with Yonhap News Agency. It is his first press interview since taking the party leadership.

Song also stressed that Samsung needs the leader of the conglomerate in office, not in jail, in order for investments to be made.

"There are growing public calls that Lee needs to work in the semiconductor and vaccine sectors amid the pandemic," Song said.

Business lobby groups have sent similar letters to the presidential office Cheong Wa Dae to ask for Lee to be pardoned, raising concerns over the absence of leadership at Samsung Electronics Co., the world's largest memory chip maker, when its rivals are ramping up investments to address a global chip shortage.