Of the around 414,000 eligible service members, about 86.5 percent applied for the inoculation, and the vaccine will be given at 91 military clinics across the nation through July 16, according to the ministry.

Soldiers aged 30 and older were already given AstraZeneca's COVID-19 vaccine, with about 88 percent, or 116,900 members, of the age group agreeing to take their first shots, the ministry said. South Korea is also scheduled to administer Johnson & Johnson's Janssen vaccine to reservists and civilians affiliated with the defense and foreign affairs Thursday. Around 1.01 million doses were provided by the United States, and they arrived here Saturday.

Janssen vaccines will only be administered to those in their 30s and older due to concerns over blood clotting among younger generations.

"Once this inoculation campaign is completed, about 87 percent of the country's 550,000 troops are expected to be vaccinated, which meets the military's target of 80 percent," Defense Minister Suh Wook said according to a release.

On Monday, the defense ministry reported two more COVID-19 cases -- an Army officer and a soldier, bringing the total number of cases among the military population to 984.

Meanwhile, the Air Force is looking into suspicions that a noncommissioned officer in the southeastern city of Gimhae suffered serious side effects, such as breathing problems, after getting his first dose of the AstraZeneca vaccine in mid-April, but his base did not immediately report the case to the health authorities in violation of related manuals.

The officer also claimed his superiors forced him to be vaccinated despite his refusal, citing personal health issues.

"We are closely looking into the case in cooperation with related agencies to reveal all the truth," an Air Force officer said. 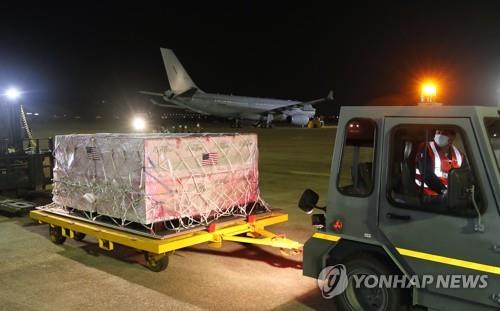