SEOUL, June 7 (Yonhap) -- RM, the leader of global dynamo BTS, has released a self-written solo song based on his experience of riding his bike across the South Korean capital.

The 3 minute and 23 second song, uploaded on YouTube and SoundCloud, is a relaxed and comforting track in which RM raps and sings in Korean and English.

RM, who has taken part in the songwriting for the seven-piece act's songs, including their latest hit "Butter," worked on his solo song with jazz singer-songwriter John Eun. 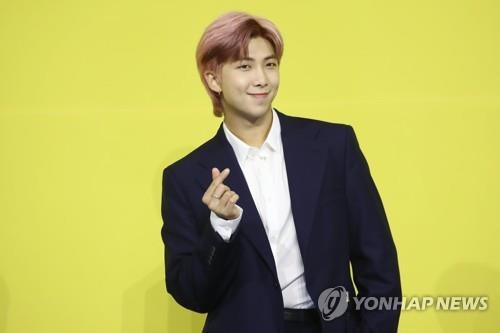 In a post updated on the band's blog, RM wrote he has always wanted to write a song about bicycles, adding that he "literally wrote the lyrics while riding (his) bicycle."

"I always feel excited about riding the bicycle. At the same time, I somehow feel sad when I put my feet on the pedal. Maybe that's because there are lots of things I miss," he wrote.

"Nonetheless, it is one of those rare moments when I feel physically free. I wanted to depict the cloudy moments I had gone through while riding a bike since I was a trainee, into a song."

"Bicycle" is RM's first solo project since his mixtape "mono." released in October 2018. The album reached No. 26 on the Billboard 200, which was then the highest ranking for a K-pop soloist.