WASHINGTON/SEOUL, June 7 (Yonhap) -- U.S. Secretary of State Antony Blinken pledged Monday to work with both South Korea and North Korea to help realize long-awaited reunions of Korean Americans with their loved ones in the North, calling it a "heart wrenching" issue.

The top U.S. diplomat also said he is "deeply sensitive" to the issue.

"This is just heart wrenching, knowing that people have been not only separated but don't even know the fate of their loved ones," Blinken said in a hearing before a House Appropriations subcommittee. 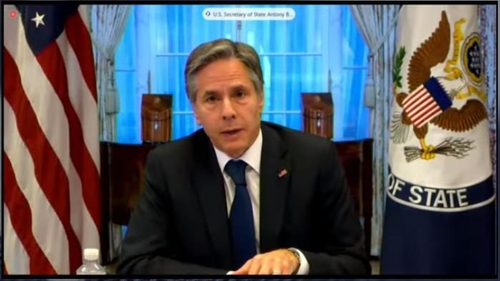 Earlier reports have said as many as 100,000 Americans of Korean descent are believed to have relatives living in the reclusive North.

Seoul and Pyongyang have held some 20 rounds of family reunions between their separated families, but none of the reunions had included those in the U.S., according to Rep. Grace Meng (D-NY).

"So what I can pledge to you is that we will absolutely work on this, including with our South Korean partners, to make sure that the interests of Korean-Americans who have been separated from families are reflected in the efforts that we make and that are made," Blinken said when asked by Meng if the humanitarian issue would be included in any future dialogue with Seoul or Pyongyang.

Blinken noted it was not clear how the North may react, saying, "It's, as you know, very, very challenging and we don't know what kind of engagement we're going to get from the DPRK."

A unification ministry official in Seoul said that South Korea will bring up the issue of the reunions of Korean Americans with their separated families in North Korea at every possible chance of future inter-Korean talks, saying the government well recognizes the urgency of the matter.

Blinken said the Joe Biden administration was "moving forward" on naming a special envoy for North Korean human rights, who would be specifically tasked with handling such issues as separated family reunions.

"Yes, you can, and we're moving forward on that," he said when asked if the appointment of a special envoy for North Korean human rights can be expected expeditiously.

"As you know, the usual challenges with vetting and everything make it, some of these things, a little slower than we would like them to be or shouldn't be, but the short answer is yes," he added.

"I think as you know, the vetting process has become ever more complicated, ever more time consuming, ever more laborious. We want to make sure that all of that is done properly, but we will do that," he said in a hearing before the House Foreign Affairs Committee on his department's Fiscal Year 2022 budget request.

The U.S. president is required by the North Korean Human Rights Act to appoint a special envoy for North Korean human rights, but the post at the State Department has been vacant since January 2017.

The new U.S. president has yet to name nominees for many top government posts, including most ambassadorial positions at home and abroad.