(ATTN: UPDATES with remarks on economy in last 4 paras)
By Lee Chi-dong

He is scheduled to attend the three-day session to open Friday in Britain, the first major in-person multilateral summit since the outbreak of the COVID-19 pandemic.

South Korea is not a member of the club of the world's most industrialized nations, but Moon is joining the meeting as a guest, along with the leaders of Australia, India and South Africa.

The G-7's invitation to South Korea means that its international stature has been heightened to the level comparable to that of its member states, Moon said during a Cabinet meeting. 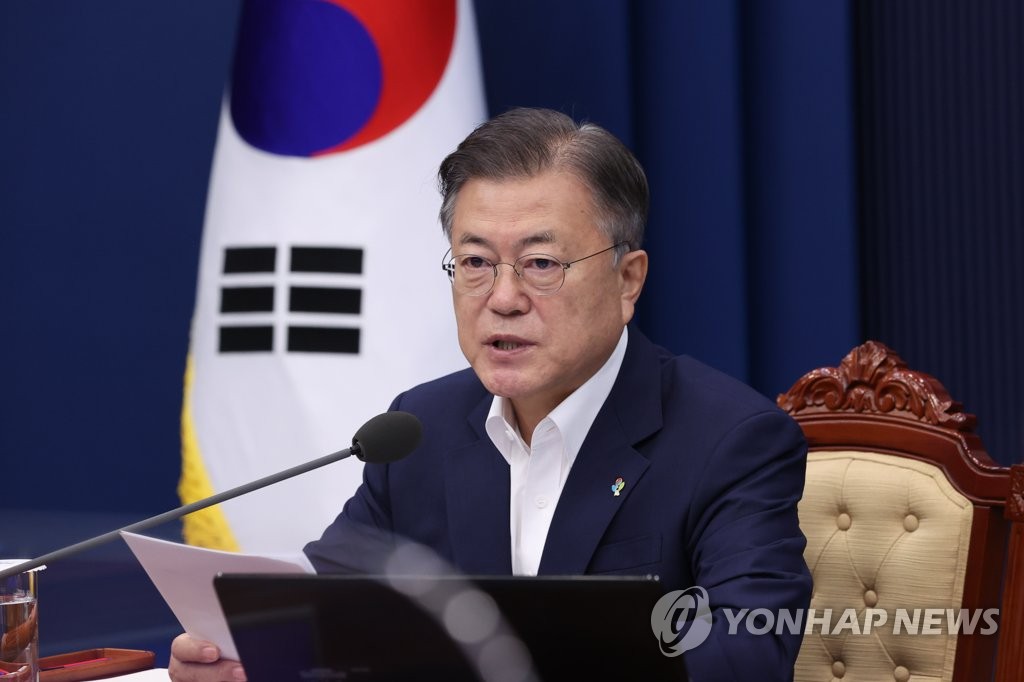 He said he would use the occasion to reinforce Seoul's role in resolving pending global issues and broaden its diplomatic scope especially by highlighting its campaign to become a "global vaccine production hub" and a "bridge" between developing and advanced countries.

Moon also said the G-7 would set the stage for a brisk round of bilateral summit diplomacy. His remarks came amid widespread speculation that he may hold another one-on-one meeting with U.S. President Joe Biden on the sidelines of the session.

Moon will also have a chance for his first face-to-face meeting with Japanese Prime Minister Yoshihide Suga, who took office last September. It remains unconfirmed whether Moon and Suga will hold formal talks in Britain despite news reports that Biden is seeking to arrange a trilateral meeting with them.

Regarding the country's coronavirus-hit economy, meanwhile, Moon said its recovery is accelerating thanks to sharp increases in exports and a rebound in domestic demand.

But a serious problem is that income polarization hasn't let up, he added.

He called on the government to focus on providing "fiscal policy support" with a top priority on addressing the matters of polarization and inequality, as well as on speedily revitalizing the job market. Moon's liberal administration has campaigned for "inclusive growth."

He pointed out that the government is pushing for another batch of supplementary budgets to be financed largely by increased tax revenue.