The Korean Confederation of Trade Unions (KCTU), a militant labor umbrella group with about 1 million members, said some 10,000 people are expected to attend the National Workers Rally scheduled for July 3 in Seoul.

"At the July 3 National Workers Rally, workers will disclose their desperate plight and feelings," the KCTU said in a news conference in Seoul, asking the government to actively take measures to ensure the success of the rally and safety of its participants. 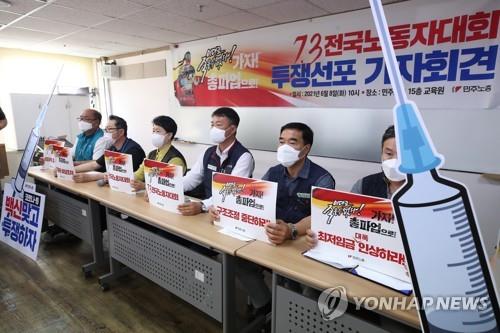 The rally, if attended by thousands of KCTU members, is expected to trigger fears of coronavirus transmissions.

Last November, the KCTU organized a similar rally in commemoration of the 50th anniversary of the death of Chun Tae-il, one of the most important figures in South Korea's labor history. At that time, however, the rallies were held in small groups at the same time all over the country.

"Participants in the July 3 rally will preemptively take coronavirus tests and get vaccinated. They will also take all necessary measures, including observance of social distancing rules, to prevent the spread of COVID-19," the KCTU said.

The group said it will encourage rally participants to get vaccinated and unvaccinated people will be allowed to attend the rally only after testing negative for the coronavirus.

The KCTU said the upcoming national rally will also deal with COVID-19-related industrial restructuring and dismissals, discrimination against non-regular workers and an upwards readjustment of the minimum wage in addition to the steady increase in fatal industrial disasters.