SEOUL, June 8 (Yonhap) -- The prosecution sought a life sentence on Tuesday for the CEO of Optimus Asset Management, who is at the center of a massive financial fraud.

At the sentencing hearing at the Seoul Central District Court, prosecutors demanded Kim Jae-hyun, head of the scandal-ridden private equity investment firm, be put behind bars for the rest of his life on charges of fraud and embezzlement.

They demanded a prison term of 25 years for Lee Dong-yeol, the company's second-largest shareholder, and 20 years for Yoon Seok-ho, an executive at the company, on the same charges.

The Optimus scandal centers on allegations that the private equity company solicited funds worth about 1.2 trillion won from thousands of people from April 2018 to June 2020 for investments in public institutions, but actually funneled most of the money into risky assets, causing huge losses to the investors. 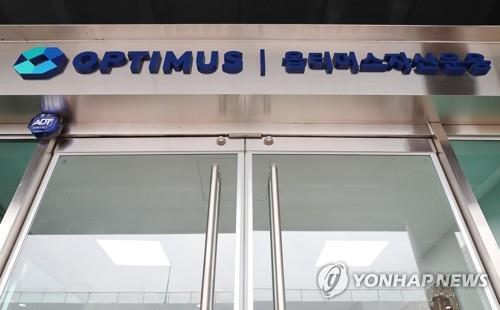