SEOUL, June 8 (Yonhap) -- Unionized delivery workers threatened Tuesday to go on strike as their talks with the government and logistics firms to prevent their overwork have made little progress.

The 6,500-strong Parcel Delivery Workers' Solidarity Union said its roughly 2,100 members who have the right to strike will stage an indefinite walkout Wednesday after holding a members' vote early in the day.

The union has been in talks with the government and logistics firms on the timing of the full implementation of a January deal, under which the companies agreed to provide additional workers to sort parcels.

The union said the dialogue fell through after the association of delivery service branches did not participate in Tuesday's talks and the companies continued to demand the postponement of the implementation of the agreement by one year.

Since Monday, unionized workers have refused to sort parcels and delayed work by two hours by reporting for work at 9 a.m. and beginning at 11 a.m. to delivery only items that have already been sorted.

The union said its members who do not have the right to strike will continue the collective action.

Delivery workers are required to sort packages before delivery without additional pay. The task is pointed to as the main cause of their long workhours.

The January deal was reached after 16 delivery drivers died last year apparently due to overwork.

Under the deal, leading logistics firms agreed to take responsibility for sorting parcels by deploying additional workers, providing extra payment and pushing to automate the job.

The three sides are conducting further talks on the details of its implementation and other additional measures, including couriers' demand for a five-day workweek, reduced workload and increased fees. 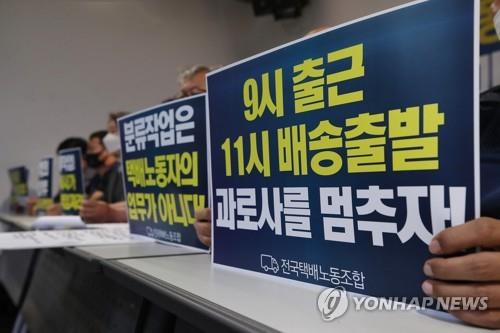