The biennial International Maritime Defense Industry Exhibition (MADEX) 2021 is scheduled to run through Saturday in the southern city of Busan. The Navy organized the event along with the Busan city government and the Korea International Trade Association.

This year's event brought together around 110 major maritime defense companies from seven countries, which are showcasing state-of-the-art weapons systems for vessels and various maritime defense systems by setting up about 400 booths, according to the Navy.

The Korean military displayed a scale model of a light aircraft carrier that the country seeks to develop, it added.

The exhibition is also being attended by more than 70 naval officers from 27 nations, who will take part in various meetings and seminars. South Korea plans to hold bilateral talks with representatives from 19 countries, according to the military.

"This year's event is expected to serve as a venue to promote exchanges among businesses and military officials despite the COVID-19 pandemic," the Navy said in a release. 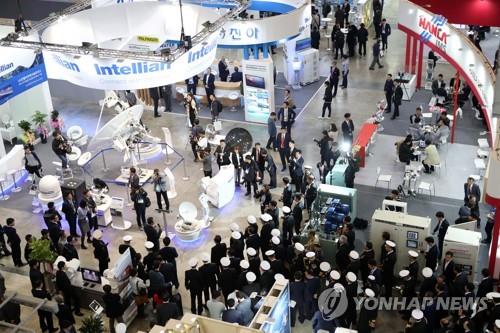