SEOUL, June 9 (Yonhap) -- South Korea's economy is expected to grow at a faster-than-expected pace in 2021 on the back of brisk exports, a leading private think tank said Wednesday.

The latest projection by KERI, the think tank under the conglomerate lobby Federation of Korean Industries, is up from its 3.4 percent estimate made in the first quarter.

KERI attributed its sanguine growth outlook to South Korea's improving exports stemming from a recovery in the global economy thanks to more COVID-19 vaccinations worldwide. 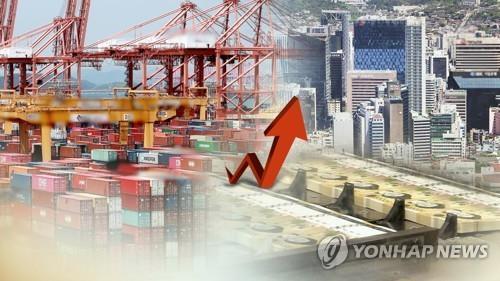 Exports, which account for about half of the nation's gross domestic production, shot up 45.6 percent on-year in May due to strong overseas demand for chips amid the global economic recovery, following a 41.1 percent jump in April.

Corporate capital spending is predicted to expand 9 percent this year on aggressive investments in chips, IT and environment-friendly sectors.

Construction investment is forecast to increase 2.1 percent this year from 2020, compared with a 0.1 percent on-year contraction in 2020.

Private consumption, which accounts for the bulk of domestic demand, is predicted to grow only 2.3 percent due to a delay in the COVID-19 vaccine supply and rising household debt. In 2020, private consumption fell 5 percent on-year in the wake of the pandemic impact.

South Korea's consumer prices will likely go up 1.8 percent on-year in 2021, compared with a 0.5 percent gain the previous year.

KERI said the biggest hurdles to this year's economic growth will be South Korea's countermeasures against a resurgence of coronavirus infections and the speed of its vaccine supply.
(END)