SEOUL, June 10 (Yonhap) -- South Korea has inoculated over 10 million people amid its accelerating vaccination drive, making the country's goal to get about 14 million vaccinated by the end of this month attainable, health authorities said Thursday.

A total of 10.06 million people had received their first shots of COVID-19 vaccines as of 11 a.m., accounting for 19.6 percent of the country's population, since the country started its vaccination program on Feb. 26, according to the Korea Disease Control and Prevention Agency (KDCA).

The nation aims to achieve herd immunity in November but hopes to reach its goal earlier than expected with the increased vaccine rollout. 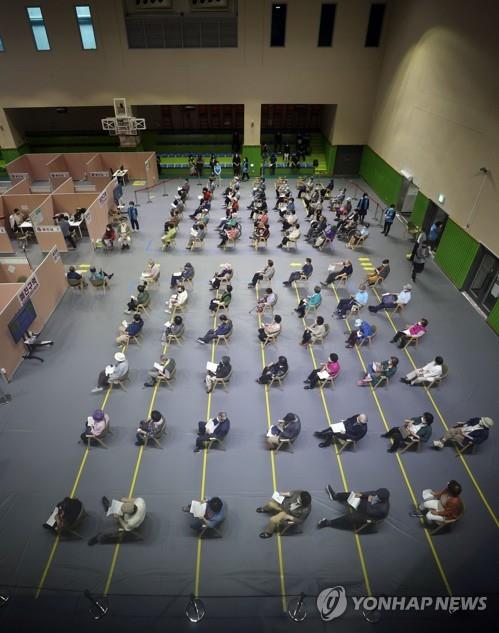 The country was able to breach the 1 million mark on April 5, and the inoculation drive has sped up recently as the country began inoculating seniors aged 60-64.

Reserve forces, civil defense members, and others in charge of defense and foreign affairs aged between 30 and 60 also began receiving the first batch of Johnson & Johnson's Janssen vaccine.

To encourage more citizens to get vaccinated, the country plans to allow people who have received their first jabs to take their masks off outdoors starting in July as its first step to normalize everyday lives.

The government is also looking to offer more incentives to vaccinated people to boost its inoculation campaign, such as giving exemptions from the private gathering ban and outdoor mask wearing.

The government announced it is pushing to allow overseas group tours of fully vaccinated citizens to nations with stable virus response measures as early as next month.

On Thursday, the country reported 611 more COVID-19 cases, including 594 local infections, raising the total caseload to 146,303.

Daily virus cases stayed in the 400s on Monday and Tuesday due to fewer tests over the weekend but spiked to the 600 range Wednesday.

(LEAD) S. Korea on course to vaccinate 14 mln by end-June

(LEAD) S. Korea on course to vaccinate 14 mln by end-June