Jeju's provincial government said 102 people tested positive for COVID-19 on the southern resort island during the past seven days, posting a weekly incidence rate of 20.9 people per 1 million. 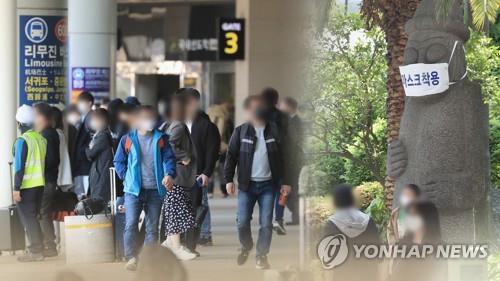 The weekly incidence rate is an indicator of how many people are infected per day per 1 million in the area during a week.

In terms of the weekly COVID-19 incidence rate, Jeju outpaced all other regions in the nation, including Daegu, which reported 19.2 confirmed cases a day per 1 million from June 2-8 due to the rapid spread of cluster infections. Seoul posted a weekly incidence rate of 19.7 people in the same period, compared with 12.9 persons for Gyeonggi Province and 5.7 people for Incheon.

As more and more people flock to Jeju, viewed as an alternative to overseas travel amid the spread of the pandemic, the monthly number of Jeju tourists topped 1 million for the second straight month in May.

The influx of visitors has further fueled the spread of COVID-19 on Jeju, prompting provincial authorities to raise its anti-COVID-19 social distancing measures by one notch to Level 2, the third highest in the country's five-tier COVID-19 alert system, late last month. Under the Level 2 scheme, the operating hours of multi-use facilities were reduced and gathering limits were strengthened.

The number of new daily infections on Jeju ranged from seven to 22 over the past week. The island has confirmed 116 cases so far this month, raising its cumulative yearly total to 737.

According to the provincial government, Jeju residents accounted for 108, or 93.1 percent, of 116 coronavirus cases reported so far this month.

It explained 69.8 percent, or 81 people, of this month's infections were transmitted by family members or acquaintances, adding the infection routes for 19.8 percent of cases have yet to be determined.