SEOUL, June 9 (Yonhap) -- Photos of BTS member Jungkook, uploaded to promote a bill on legalizing tattooing, have provoked the ire of BTS fans who say a lawmaker has unfairly dragged the K-pop star into politics.

Rep. Ryu Ho-jeong of the progressive minor Justice Party posted several photos of Jungkook on her Twitter account Tuesday, including some showing the star on a TV show with a bandaid covering his tattooed finger.

"Remove the bandaid from the body of BTS," Ryu said in the Twitter post, introducing her legislative initiative to legalize tattooing by non-medical workers.

Tattooing is currently governed by the Medical Service Act that only allows those with a medical license to provide tattoo services.

"Have you seen a bandaid plastered on the body of an artist you love? This ugly scene, uniquely rampant in Korean broadcasting, is designed to cover up tattoos," Ryu wrote.

"Tattooing (by non-medical workers) is still illegal (here) ... Korea has turned its back on 'K-tattoo' at a time when the population of people with tattoos reaches 3 million," she said, introducing her bill on the tattoo industry. 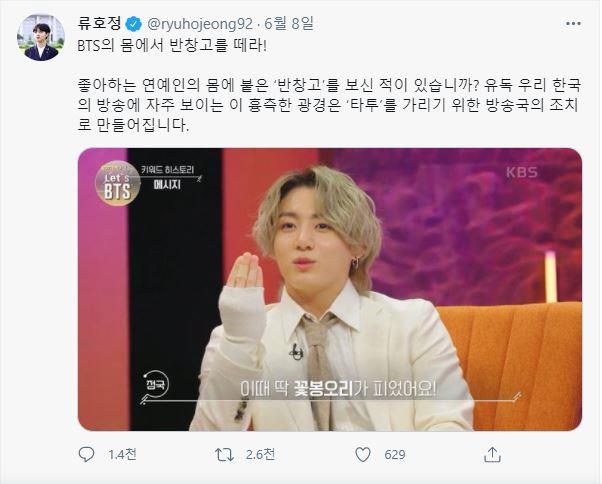 "Please take down the photos. Do you really have to use portraits of a certain artist to make political remarks? ... I don't understand why the idea of tattoo conjured up the image of BTS' Jungkook in your mind," a fan responded on Twitter.

"Have you received consent from (Jungkook)? If not, are you trying to get a free ride on BTS' fame?" another fan said on Twitter.

Ryu has not reacted to the wave of fans' protests online, nor their demand to delete the photos.

The medical act, however, falls short of embracing the burgeoning tattoo market.

Even a veteran tattooist may face fines of up to 10 million won (US$8,968), or even jail time, for providing tattoo service. This dates back to a 1992 Supreme Court ruling that defined tattooing as a medical service. Article 27 of the Medical Service Act indicates that "medical practices," including tattoos, can only be conducted by licensed medical personnel.