GWANGJU, June 9 (Yonhap) -- A building collapsed during demolition in the southwestern city of Gwangju on Wednesday, leaving at least nine people dead and eight others seriously injured, fire officials said.

They received a report at 4:22 p.m. that the 5-story building had collapsed and fell onto a bus that was stopped at a station near the construction site.

As of 8:40 p.m., nine people were confirmed dead and eight others were seriously injured and taken to nearby hospitals. All of them are bus passengers.

The fire fighters initially assumed that there were 12 people on the bus, but they found more victims trapped inside as the rescue operation went on.

Two passenger cars were initially believed to have been also buried under the rubble, but the authorities later confirmed from closed-circuit video footage that they narrowly escaped the accident.

Yang Ik-je, who runs a shop across the street of the construction site, said he ran outside, jolted by the loud noise that made him feel as if "the earth was shaking."

"I could not see the road clearly, as if it were shrouded in thick fog," he said. "I checked the CCTV to find out that the building collapsed onto a bus." He said he immediately reported the accident to authorities.

Rescuers are searching for any construction workers or pedestrians who might have been buried beneath the debris.

The cause of the collapse is not immediately known. 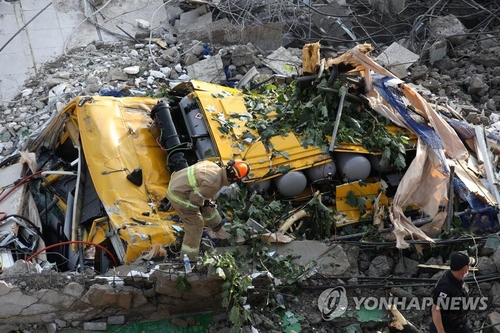 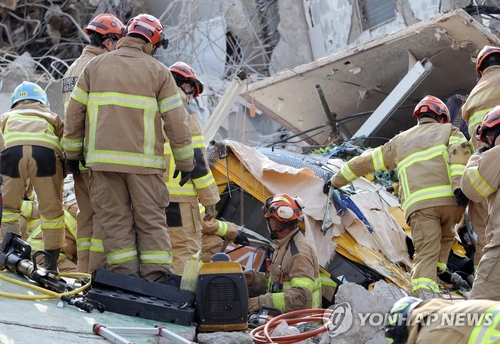