Choi said he and U.S. Deputy Secretary of State Wendy Sherman also agreed on the need to engage with North Korea to advance the goal of denuclearizing the Korean Peninsula, as the two sides discussed follow-up measures to the outcome of last month's summit between President Moon Jae-in and U.S. President Joe Biden.

"Deputy Secretary Sherman and I share the view that the summit was a success in both content and form, and that the two leaders have made more comprehensive and meaningful progress than ever," Choi told reporters.

"We agreed the foreign ministry and the State Department would accelerate our efforts to take practical follow-up measures," he added. 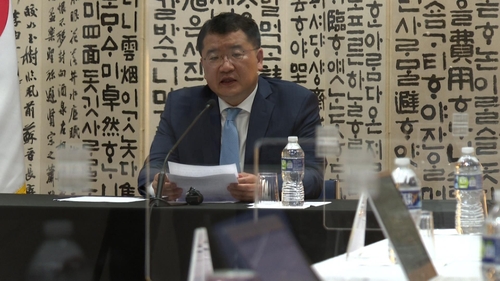 To this end, Choi said the countries have agreed to "actively promote cooperation" on supply chains.

In a joint statement issued at their May 21 summit, Biden and Moon called for joint efforts to increase resiliency in their countries' supply chains, "including in priority sectors, such as semiconductors, eco-friendly EV batteries, strategic and critical materials, and pharmaceuticals."

"We have established a foundation to swiftly take follow-up steps only 20 days after the South Korea-U.S. summit," Choi said.

The two also highlighted the importance of diplomacy toward North Korea to peacefully denuclearize the Korean Peninsula.

They "noted that continued diplomacy and dialogue is key to realizing the goal of completely denuclearizing the Korean Peninsula and establishing permanent peace that the countries' leaders called for in the South Korea-U.S. summit," the foreign ministry said in a press release.

Choi said he and Sherman agreed on the need for their countries to "persistently" work closely together to resume practical dialogue with North Korea.

In a separate press release, the State Department said that Choi and Sherman highlighted cooperation on "shared priorities," including addressing the climate crisis and challenges in the Indo-Pacific and strengthening cooperation on global health and secure supply chains.

Choi and Sherman also stressed that cooperation between and among South Korea, the U.S. and Japan is "essential" to solving global challenges, while reaffirming the importance of restoring Myanmar's path to democracy, according to the department.

It was Choi's first in-person meeting with Sherman.