The case was belatedly known to the media amid huge public outrage over the suicide of a sexually abused female Air Force noncommissioned officer.

According to the officials, the lieutenant colonel of an Army base in Gangwon Province is suspected of forcibly having sexual contact with three female officers and making inappropriate comments repeatedly.

As one of the victims reported the case to her division commander in mid-May, the suspect was relieved of duty, sent to another base and has come under probe by the Army Central Investigation Division, the officials said.

"The Army investigators sought an arrest warrant for the suspect on sexual harassment charges. We will continue investigation to see if there are more individuals victimized by the man," an Army officer said. 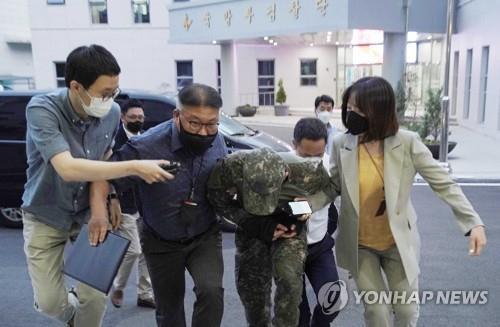 In a separate case, a military doctor was sentenced to 3 1/2 years in prison on Tuesday for forcibly taking a female officer to his home and trying to rape her last year.

The doctor in his 70s affiliated with the Korean Armed Forces Capital Hospital proposed a dinner together and committed the crime while intoxicated, according to the officials.

The two have known each other since 2017, as the officer was given treatment from the doctor after being sexually abused by an Army noncommissioned officer. The doctor, surnamed Roh, is a renowned neurologist and was a doctor to former presidents.

After the incident, the victim left the military last month.

"We will sternly deal with the cases according to law," defense ministry spokesperson Boo Seung-chan said.