SEOUL, June 10 (Yonhap) -- Public anger has grown this week after a court dismissed a group of forced labor victims' damages suit against Japanese firms, with some accusing the judge of injecting his personal beliefs into the ruling and demanding that he be impeached.

The Seoul Central District Court dismissed the case Monday, saying that while the 85 victims and their family members may claim damages from the Japanese government and the 16 Japanese businesses for their forced labor during World War II, they are not entitled to do so in court. 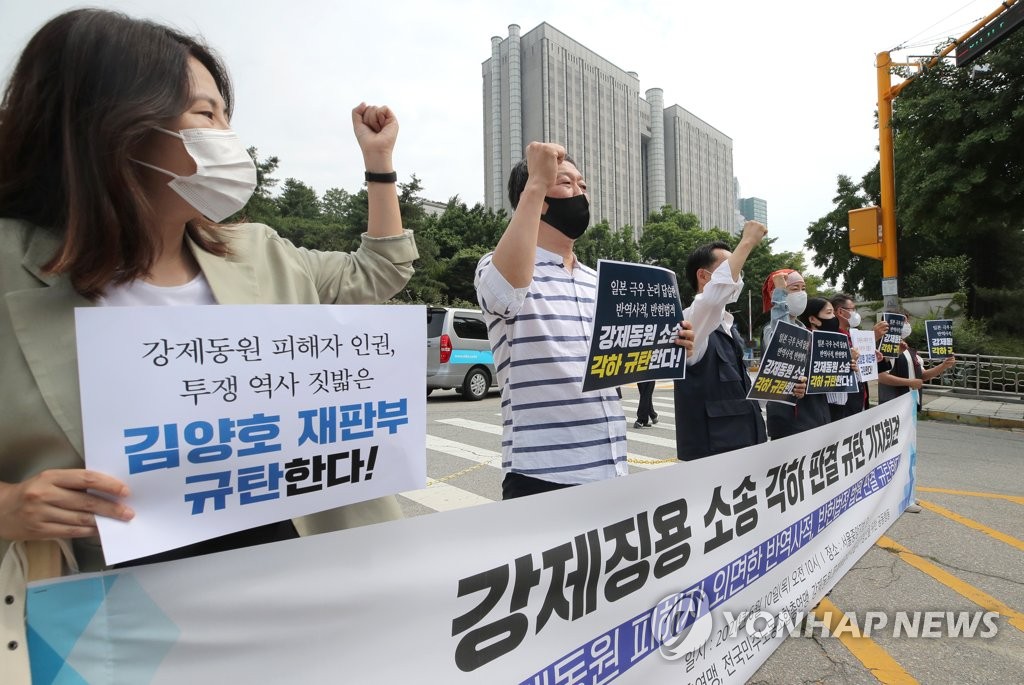 Kim Yang-ho, the senior judge presiding over the case, said accepting the plaintiffs' claim would risk violating a 1965 treaty that normalized relations between South Korea and Japan after Tokyo's 1910-45 colonial rule of the Korean Peninsula. Kim also cited concerns about breaking international law in the process.

His remarks invited public condemnation, including in a petition posted to the Cheong Wa Dae website the following day which called for Kim's impeachment for his "ruling that goes against the country and the nation."

The petition had more than 270,000 signatories as of Thursday afternoon, where 200,000 mandates a response from the government. The petition is ongoing.

The judge's remarks also prompted criticism from the ruling Democratic Party (DP), including from its chairman Song Young-gil. Speaking at a Supreme Council meeting on Wednesday, Song took issue with the fact that the ruling contradicted the Supreme Court's decision in 2018 to uphold a lower court's ruling ordering Japanese firm Nippon Steel to pay 100 million won (US$89,600) each in compensation to four Korean plaintiffs. 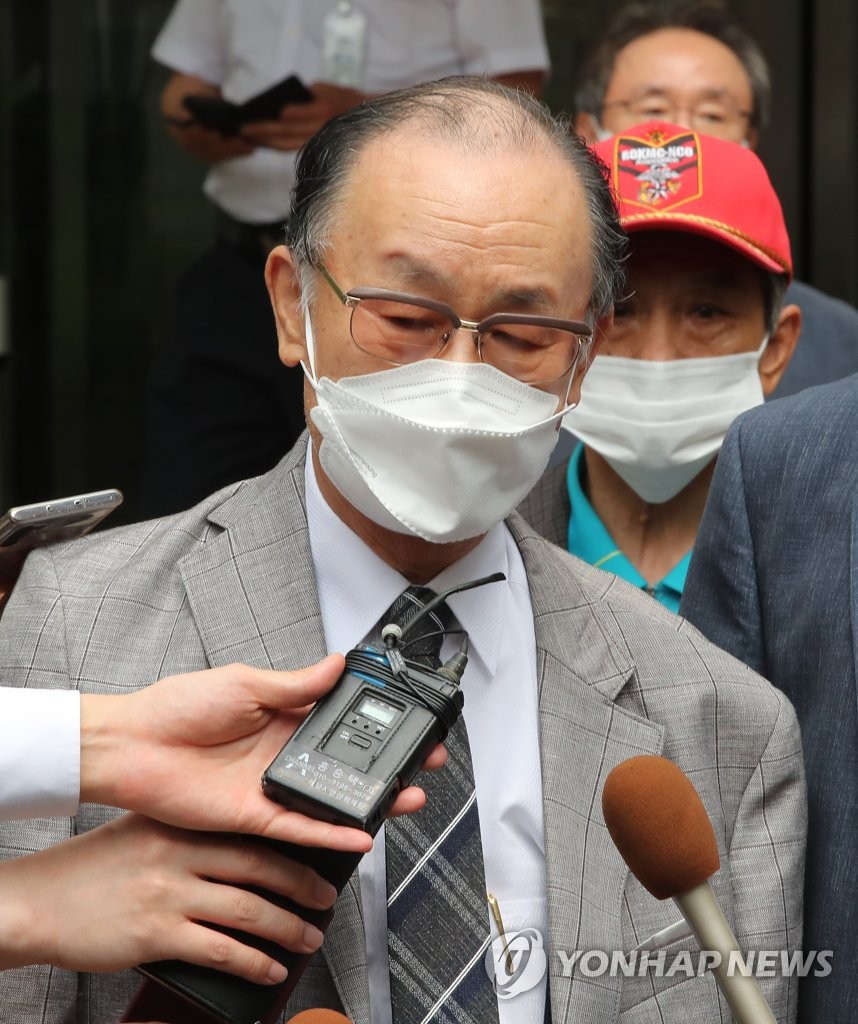 "This ruling makes me wonder if it was given by a judge belonging to the Gyeongseong court of the Japanese government-general in Korea," Song said, referring to the period of Japanese occupation of Korea.

Rep. Baek Hye-ryun of the DP added that the ruling contained "far too many similarities" with Japan's position on the issue of compensation and accused the judge of overstepping his boundaries by expressing concern for South Korea's place in the world.

"The courts should make a legal judgment based on facts and reflecting a historical awareness," she said.

One of the judge's controversial remarks is his claim that if the court rules in favor of the plaintiffs but the decision is reversed by the International Court of Justice (ICJ), "trust in South Korea's judiciary will receive a devastating blow and the dignity of South Korea as a civilized nation that has just become one of the world's top 10 powers will fall to the ground."

The judge went on to say that as a divided nation, wedged between the four major powers, South Korea would see a deterioration of its relations with Japan -- "a leading nation among the western forces that share the constitutional value of a free democracy."

He said that, in turn, would lead to a deterioration of ties with the United States, an ally nation "directly related to" South Korea's national security, and a possible undermining of the constitutional assurances of security and maintenance of order. 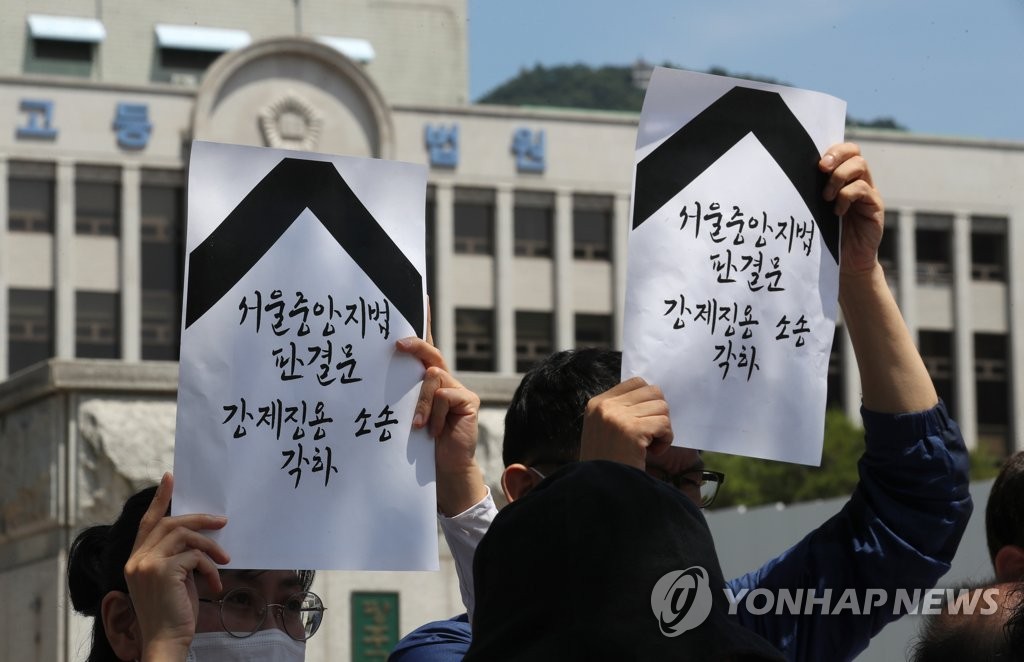 Lim Jae-seong, a lawyer who is litigating a separate case of forced labor, took to his social media account Monday to respond in jest: "Have you ever seen a bench so explicitly worry about the country in a ruling while rejecting a claim in a civil suit?"

The debate underscored the resentment many South Koreans still feel toward their former colonial ruler and the frustrations they attribute to Tokyo's lack of repentance for its past atrocities.

In an almost identical turn of events, a group of Korean women who were forced into sexual slavery for Japanese troops during World War II won a damages suit against the Japanese government in January, but the same court dropped a similar case filed by a separate group of victims in April, citing a state's immunity from a civil suit in foreign courts.

While the latter ruling upset the plaintiffs, there was no visibly angry reaction from the public at the time.

The bench overseeing that case had cited comparable cases in Europe that were later overturned by the ICJ, but it did not offer a list of a historical and political reasons for rejecting the plaintiffs' claim.

It also held seven hearings, including five sessions after the senior judge who issued the ruling took office in February 2020.

In contrast, the bench led by Judge Kim held one hearing and immediately set the sentencing date for June 10.

By Monday, the court had rescheduled the sentencing for the same day, three days earlier than planned, saying it was for the sake of "peace and stability in court."