SEOUL, June 11 (Joint Press Corps-Yonhap) -- President Moon Jae-in departed Friday for Britain to attend an annual Group of Seven (G-7) summit, the outset of his weeklong trip to Europe that will take him to Austria and Spain as well.

He is joining the G-7 session as a guest invited by British Prime Minister Boris Johnson, the host of the three-day event to take place until Sunday at the Carbis Bay Hotel in the southwestern county of Cornwall. 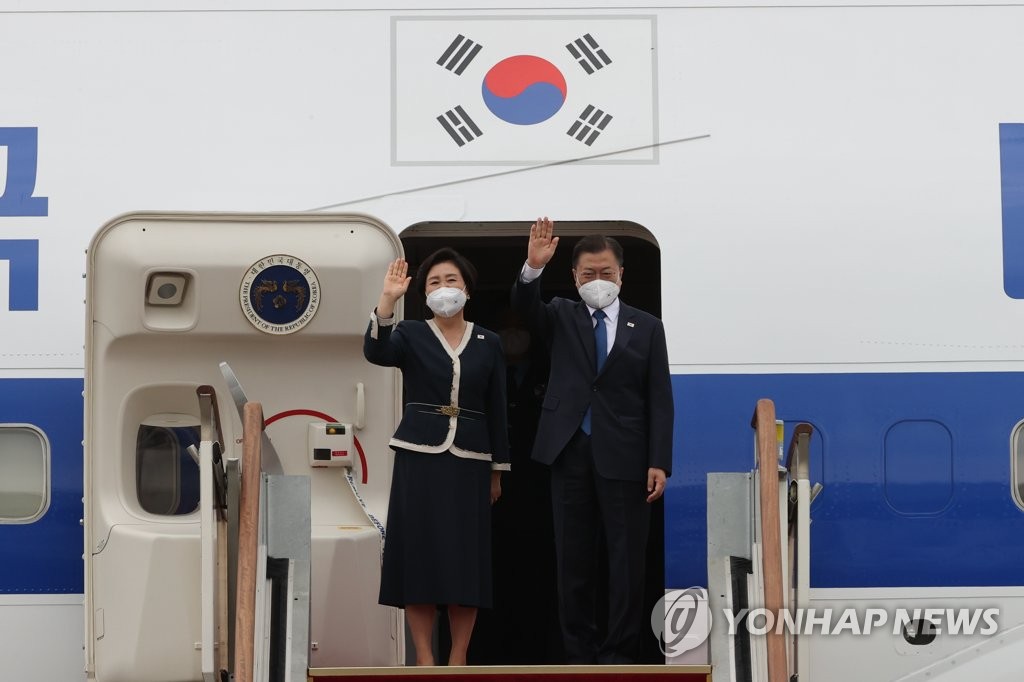 At the "expanded" forum on Saturday and Sunday, Moon plans to have discussions on how to address such global challenges as a health crisis, climate change and trade disputes.

Other participants include the leaders of the G-7 member states: the United States, Canada, France, Germany, Italy, Japan and Britain, as well as representatives from the European Union. The leaders of Australia, India and South Africa have been also invited as guests, while Indian Prime Minister Narendra Modi is taking part via video link due to the severity of the COVID-19 pandemic in his country.

Moon said the G-7's invitation for South Korea to its annual summit reflects the rise of its international stature to a "level on par with G-7 members."

"My participation in the summit itself will serve as a catalyst for upgrading our diplomacy," he said during a Cabinet meeting earlier this week.

"Our responsibility and role in the international community have now grown even larger," he added, describing the G-7 summit as an opportunity to broaden Seoul's "diplomatic horizons" and enhance its role in resolving pending global issues.

On the fringes of the summit, Moon plans to hold one-on-one talks with his British, Australian and EU counterparts.

No formal bilateral meeting with Japanese Prime Minister Yoshihide Suga is scheduled, according to Cheong Wa Dae officials. But they did not rule out the possibility of the two having informal talks, like a "pull-aside," probably joined by U.S. President Joe Biden. The White House said "virtually anything is possible in a small space where 10-12 leaders gather in one place."

Following the G-7 gathering, Moon will fly to Austria for a state visit, becoming the first South Korean president to travel there officially since the two sides established diplomatic ties in 1892.

He is to have summit talks with President Alexander Van der Bellen and a meeting with Chancellor Sebastian Kurz on improving bilateral relations.

Moon will then head to Spain on Tuesday for a three-day stay, during which he will hold a summit with Prime Minister Pedro Sanchez. The two are slated to attend an event together, called the South Korea-Spain green and digital business summit. Moon is set to meet with King Felipe VI, who made a visit to South Korea in 2019.

Moon is to return to Seoul on June 18.