SEOUL, June 11 (Yonhap) -- Police on Friday sent a man to the prosecution on charges of filming and distributing nude photos and videos of more than 1,300 boys and men.

Kim Young-jun, whose identity was disclosed by the police earlier this week, is accused of filming about 27,000 nude videos of the victims, including 39 minors, and sharing them online from 2013 until recently.

On Friday morning, the 29-year-old appeared in front of reporters for the first time as police officers took him from Jongno Police Station in central Seoul, where he has been in pretrial detention, to the Seoul Central District Prosecutors Office for further investigation.

"I want to say that I am very sorry to the victims," he said when asked if he admitted to the charges.

"I will live in repentance," he said, adding that he committed the crimes alone. 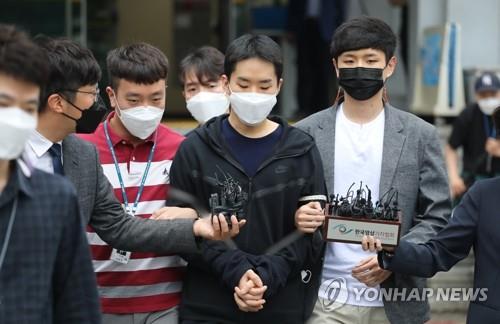 According to the police, Kim posed as a woman in order to meet men on chatting apps and filmed them naked during video calls.

To avoid suspicion, he used obscene materials of women he found on the internet and disguised his voice with a device.

Police said the suspect possessed around 45,000 pieces of illegally filmed explicit material of women, which he used to attract the men.

He also lured seven teenage or younger boys to his home or motels by offering a meeting with the woman he was posing as and filmed them performing sexual acts.

Police launched an investigation in April after receiving a complaint from a victim and apprehended the suspect at his home on June 3.

Police have also been looking into other people who redistributed and purchased the videos from Kim and working with the government to delete the original files and remove copies from the internet.