SEOUL, June 11 (Yonhap) -- South Korean stocks advanced for the second straight session Friday despite the steep hike in the U.S. price gauge, as investors believed the price pressure is still short of triggering talks of tapering by the Federal Reserve. The Korean won rose against the U.S. dollar.

Trading volume was moderate at about 1.6 billion shares worth some 17.6 trillion won (US$15.8 billion), with gainers outnumbering losers 517 to 335. 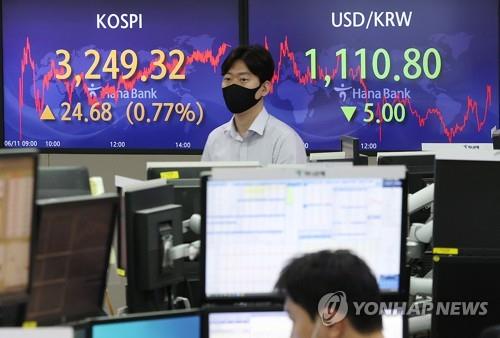 The KOSPI got off to a strong start on overnight Wall Street tech gains, as investors shrugged off the consensus-beating U.S. consumer price index (CPI) for May. The price index expanded 5 percent, marking the highest on-year jump since 2008.

Optimism about a quick economic rebound also drove up the stock prices, following a 40.9 percent on-year jump in South Korean exports in the first 10 days of June.

"Investors seem to have taken the U.S. CPI data for May as a passing variable that resulted from the baseline effect and short supply (of chips)," said HI Investment & Securities analyst Park Sang-hyun.

The local currency closed at 1,110.8 won against the U.S. dollar, up 5 won from the previous session's close.

Bond prices, which move inversely to yields, closed mixed. The yield on three-year Treasurys lost 0.6 basis point to 1.276 percent, while the return on the benchmark five-year government bond added 2 basis points to 1.658 percent.