SEOUL, June 14 (Yonhap) -- Young South Korean football players hoping to compete at the Tokyo Summer Games will be raring to take the field Tuesday, when they'll have one last opportunity to build their case for inclusion on the 18-man Olympic squad.

Of 28 players at training camp for the men's Olympic football team, 18 saw action in the first of two friendlies against Ghana on Saturday.

Head coach Kim Hak-bum had long declared he would use all 28 players across these two matches. But then he added two more players into the mix Monday, calling up midfielder/defender Won Du-jae and winger Lee Dong-gyeong after they'd competed for the senior national team in World Cup qualifiers earlier in the month.

This should mean a dozen players who didn't get into Saturday's match, plus a few who only had limited minutes then, will see the bulk of action starting at 8 p.m. Tuesday at Jeju World Cup Stadium in Seogwipo, Jeju Island. 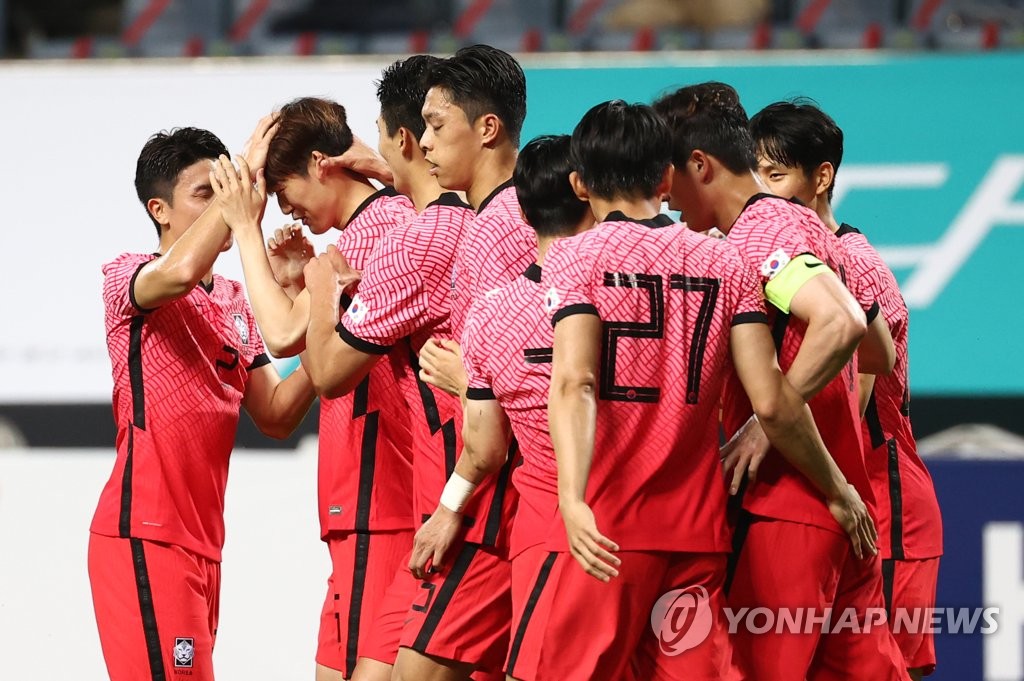 At the same venue on Saturday, South Korea beat Ghana 3-1 despite playing more than half the match a man short. They were up 1-0 when fullback Kim Jin-ya got the direct red card, and thus an automatic ejection, for a hard challenge on an opposing player near the 40-minute mark.

But South Korea scored twice more after Kim was gone, while Ghana couldn't sustain their pressure built early in the second half and managed only one goal.

Coach Kim would certainly like to see similarly determined efforts on both ends when new faces step into the lineup.

Conspicuous by his absence on Saturday was midfielder Lee Kang-in. Though he's the youngest member of this under-24 team at 20, Lee may just be the most gifted playmaker on the squad. To wit: he has yet to appear in a match in this age group but already has six caps for the senior national team.

Lee did his warm-up and stretching routines near the bench during the second half on Saturday, but Kim said he never even planned to use Lee in that match. 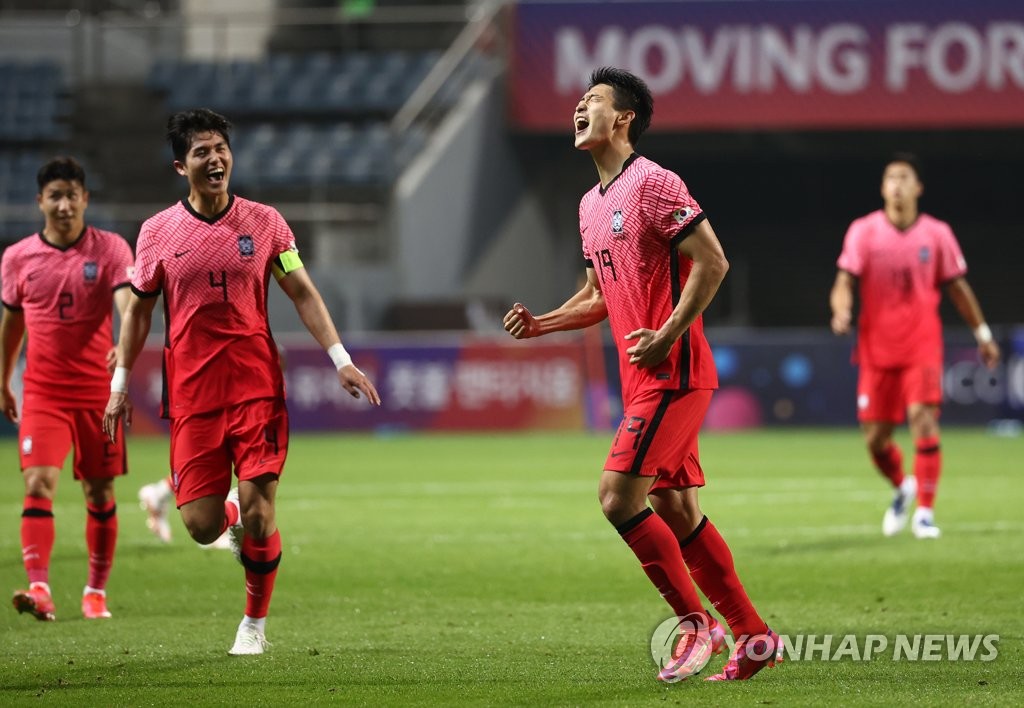 Lee is one of three Europe-based players for Kim, along with Jeong Woo-yeong of SC Freiburg and Lee Seung-woo of Portimonense. Jeong was a second-half sub on Saturday and should get more minutes this time. Lee Seung-woo, on the other hand, may have played himself out of the Olympic picture with an uninspired performance as a starter on Saturday.

Such is the intensity of the roster competition for the precious few spots.

The typical Olympic men's football tournament is open to players 23 and younger, but the age limit has been lifted by one year for this year because the Tokyo Olympics got postponed by a year due to the coronavirus pandemic.

And coach Kim won't just be cutting 10 players from his current squad. All teams at the Olympics can each name up to three players over the age limit, and Kim will definitely use all three spots to bolster South Korea's medal chances. That leaves just 15 spots up for grabs for the under-24 group this time.

Then there are three up-and-coming U-24 stars who played for the senior national team at World Cup qualifying matches and who will deserve Olympic consideration.

Won Du-jae appeared in all three qualifiers, including a start against Sri Lanka last Wednesday. Lee Dong-gyeong started that match as well, and fellow winger Song Min-kyu had the starts against Sri Lanka and then against Lebanon on Sunday.

Won, who came off the bench in the 67th minute against Lebanon, and Lee, who didn't play Sunday, will join Kim's squad in Jeju later Monday. Song was left off because he played 83 minutes versus Lebanon and Kim decided to give him a breather. 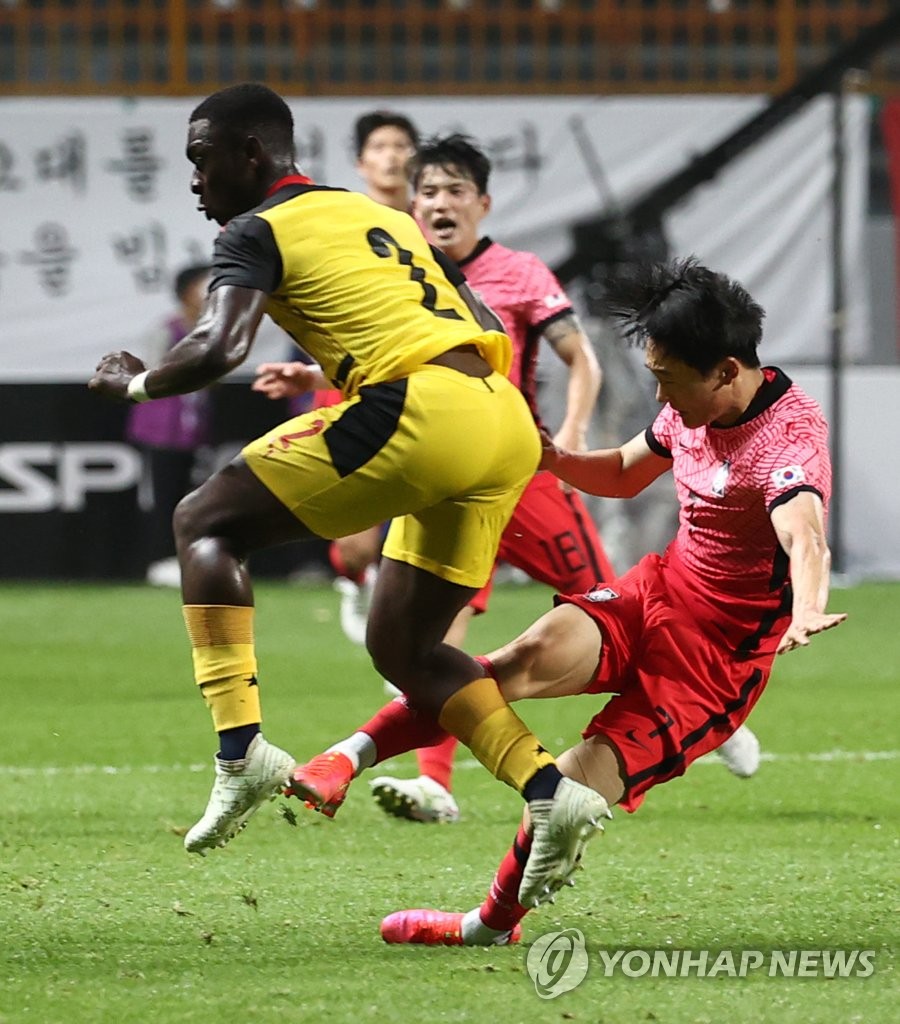 The coach hasn't decided at which positions he will most need help from the over-24 talent pool. The team looks set in net with U-24 players. Song Bum-keun, 23, has long had the stranglehold on the No. 1 job and brings plenty of pedigree and upside.

Kim may name at least one forward, given the lack of game-breaking talent up front. Striker Cho Gue-sung scored an impressive goal against Ghana last weekend to state his case. His main internal rivals, Lee Dong-jun and Oh Se-hun, were benched Saturday, and will likely get into the starting lineup Tuesday for a chance to throw their hat into the ring.

South Korea will face Romania, Honduras and New Zealand in the group stage in Tokyo. Kim's team will try to top the bronze medal that South Korea won at the 2012 London Olympics. It remains the country's best showing at an Olympic men's football competition. 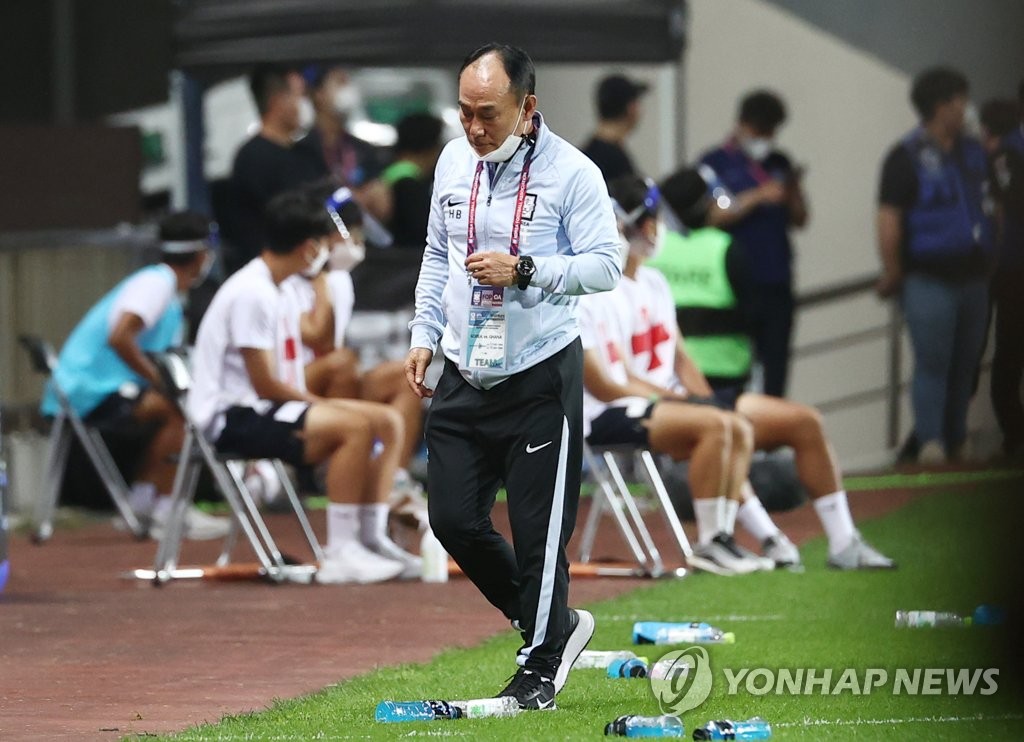