SEOUL, June 14 (Yonhap) -- South Korea plans to stage an annual military exercise on and around its easternmost islets of Dokdo this week to beef up the country's defense capabilities, sources said Monday.

The drill, named the East Sea Territory Protection Exercise, is scheduled to take place Tuesday, and will involve the Navy, the Air Force and the Coast Guard, according to the government and military sources.

The Marine Corps will not join this year's program, as no landing drill will take place, the sources said, adding that it will be staged in a way that minimizes in-person contact given the COVID-19 situation.

"As a regular joint exercise, the upcoming drill is aimed at responding to threats to our territory, people and properties," a military official said.

South Korea launched the Dokdo drills in 1986. Since 2003, it has typically conducted the training twice a year, usually in June and December, to better fend off possible foreign infiltrations in the area.

Last year, the military staged the drills twice, but they became known to the public belatedly as the authorities did not disclose details in an apparent move to avoid aggravating tensions with Japan.

In protest against the regular drill, Japan called off agreed-upon talks between President Moon Jae-in and Japanese Prime Minister Yoshihide Suga during the Group of Seven (G-7) meeting in Britain last week, a foreign ministry official in Seoul said.

Bilateral relations between Seoul and Tokyo have been at one of their lowest ebbs in recent years over historic and diplomatic issues that have spilled over to the economic and military realms.

Japan has repeatedly laid territorial claims to Dokdo, though South Korea has been in effective control of the islets with a small police detachment since its liberation from Japanese colonial rule in 1945.

But efforts to improve bilateral ties have been made as the United States seeks to strengthen trilateral security ties with Seoul and Tokyo to better counter China and North Korea. 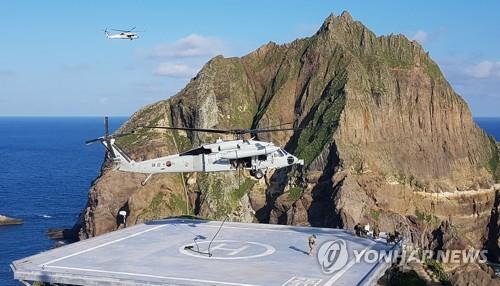