The consortium is expected to compete with SJ Co., a mid-sized local construction company, which was picked as a preliminary preferred investor in early May in the "stalking horse bid" process. SJ already submitted its bidding price.

The consortium reportedly offered 120 billion won to acquire Eastar, about 20 billion won more than SJ's bidding price. SJ can maintain its preferred bidder status if it submits a price that matches the consortium's offer.

Under the stalking horse bid process, a bidder that offers a higher price will be the official preferred bidder for Eastar, the company's CEO Kim You-sang said over the phone.

Pan Ocean, a shipping firm wholly owned by chicken-processing company Harim Holdings Corp., as well as other private equity funds, have shown interest in the budget carrier, but they did not submit bids, the sources said.

Eastar plans to review the bidding prices, its financing plans and business plan after acquisition to select the final preferred bidder on June 21. 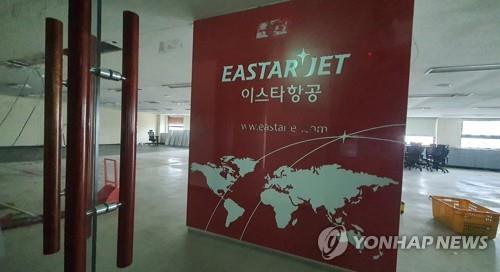 A preferred bidder is scheduled to conduct diligence on Eastar for one to two weeks and sign a deal to buy the low-cost carrier, currently under a court-led rehabilitation scheme, in July.

The bankruptcy court approved the corporate rehabilitation process for the carrier in February.

Eastar is required to submit its debt-repayment and other rehabilitation programs to the court by July 20, which was delayed by two months.

The acquisition price for Eastar is estimated to reach at least 100 billion won (US$90 million).

The carrier earlier said it aims to receive an air operator certificate (AOC) from the transport ministry once the Seoul bankruptcy court accepts its rehabilitation program to resume domestic flights within this year.

It has had difficulties in finding a strategic investor since July last year, when Jeju Air Co. scrapped its plan to acquire the carrier amid the prolonged COVID-19 pandemic.