SEOUL, June 14 (Yonhap) -- South Korea's smaller forms on Monday called for a further delay in enforcing the 52-hour workweek system for them set to take effect next month amid the extended COVID-19 pandemic.

In a joint statement, the country's business lobby groups, such as the Korea Chamber of Commerce and Industry and the Korea Enterprises Federation, called on the government to allow companies with a workforce of fewer than 50 people more time to prepare for the 52-hour workweek amid the prolonged fallout from the pandemic.

"The government should give them more time to adapt to the shortened workweek as it did to large conglomerates and medium-sized enterprises (SMEs) that hire more than 50 people," the statement said.

Introduced in 2018, the 52-hour workweek scheme was devised to cap the average working hours at 52 on a weekly basis in Asia's fourth-largest economy, known for long working hours compared with other Organization for Economic Cooperation and Development members.

The rule has been applied to large companies with 300 or more workers since July 2018 and was initially set to be expanded to SMEs in 2019.

But the government offered a one-year grace period for smaller businesses, reflecting financial concerns for smaller companies amid an economic slowdown.

The government's decision to expand the shorter workweek policy as planned was made against the business community's demand for an extension of the grace period for another year. 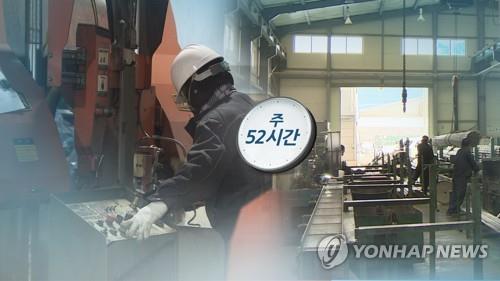