SEOUL, June 15 (Yonhap) -- South Korea will strive to resume the long-suspended dialogue and exchanges with North Korea, Unification Minister Lee In-young said Tuesday as the country marked the 21st anniversary of the first-ever inter-Korean summit in 2000.

Lee also noted that "quite good conditions" have been generated for North Korea to come out for dialogue thanks to last month's summit talks between President Moon Jae-in and U.S. President Joe Biden as they promised to use diplomacy to resolve the North's nuclear problem.

"For the North, quite good conditions have been created to come out for dialogue," Lee told a forum to mark the 2000 inter-Korean summit between then South Korean President Kim Dae-jung and then North Korean leader Kim Jong-il.

"Our government will strive to turn this rarely-won window of opportunity into a chance to get inter-Korean relations back on track as soon as possible in a way that we can take the path toward peace on the Korean Peninsula again," he said.

He hailed the June 15 Declaration adopted after the 2000 summit as a major "turning point" from decadeslong confrontations and enmity between the two Koreas to peace and stability and as a booster for active cross-border exchanges and cooperation in various areas.

"Among other things, the experience of the June 15 (summit) clearly proved that an advance in relations between the South and the North could result in an improvement in ties between the North and the U.S. and also drawing support from the international community," he said.

The minister expressed hope that the two Koreas could start cooperation in the humanitarian sector first, such as joint efforts to fight the global coronavirus pandemic and provision of food and fertilizer across the border. 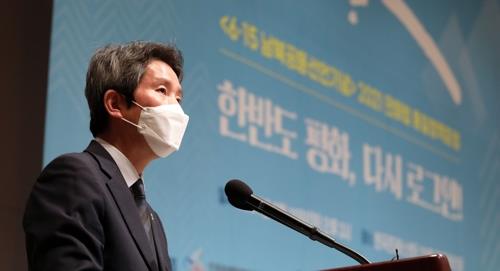