The Daejeon Metropolitan Police Agency in the central city said that it has booked the 11 smuggling suspects through cooperation with the Cultural Heritage Administration (CHA) and referred them without detention to the prosecution for indictment. 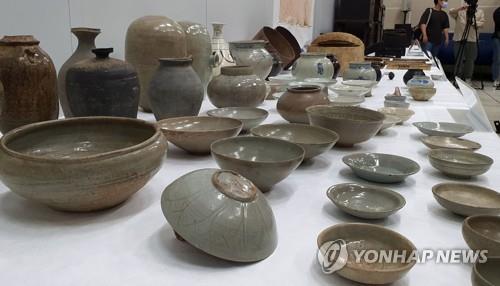 The booked foreign suspects consist of three from Japan, including a Korean-Japanese, two from China and one each from Vietnam and Germany, the police agency said, noting their occupations are diverse, such as cultural property brokers, a Korean teacher in Japan and a researcher.

The foreign suspects, who came to South Korea for sightseeing and other purposes, bought at least 92 pieces of cultural artifacts, including celadon porcelain, old books and ancient silver coins, in Seoul's Insa-dong district from December 2013 until recently and attempted to smuggle the treasures abroad by hiding them in suitcases, it said.

They packed ancient books and ceramics in newspapers or wooden boxes to pass through the airport security checkpoint, police said, adding some items were already sent abroad through international courier service.

Police have seized 92 pieces of cultural assets from the 11 suspects and will send them to the CHA. 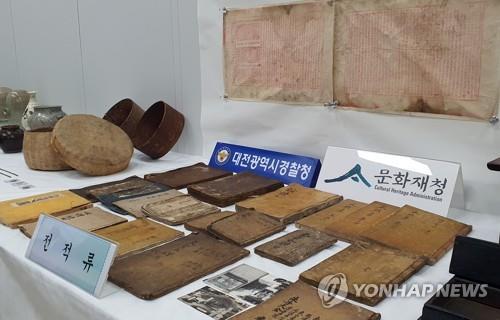 The seized cultural assets include ceramics of the Goryeo Dynasty (918-1392), which have artistic and academic value high enough to be classified as national treasures, according to experts.

"Most of the seized artifacts, including those from the Goryeo Dynasty, retain their original form. An inkstone box from the Joseon Dynasty (1392-1910) is deemed rare due to its well preserved wood grain," an official from the CHA said

According to police, the suspects made statements to the effect that they did not know their behavior would become a problem. But police said they have confirmed their criminal intentions.

"It turned out that the suspects knew the value of the concerned cultural assets and attempted to resell them at a higher price in their home countries," a police officer said.