The Gwangju Metropolitan Police Agency sent a dozen investigators to the leading real estate developer's Seoul headquarters to execute a search and seizure warrant and ascertain whether the company is responsible for the disaster, they said. 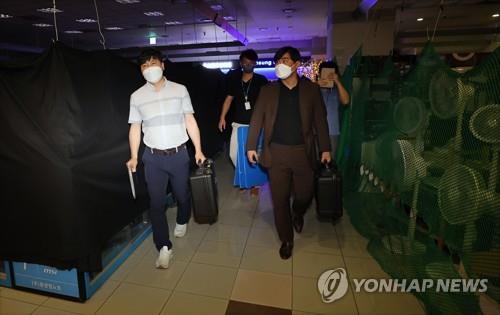 On June 9, a five-story building being demolished in the Hakdong District 4 redevelopment project in Gwangju, 330 kilometers south of Seoul, fell on a city bus on an adjacent road, killing nine bus passengers and seriously injuring eight others.

HDC is suspected of having instructed Baeksol to spray too much water on the collapsed building due to concern over dust complaints from residents. Police investigators suspect that the soil may have caved in after becoming heavy with excessive water spray, directly or indirectly affecting the collapse of the whole building.

They are also investigating whether there was any illegality in contracts between HDC and its subcontractors, as the existence of re-subcontracting has been confirmed.

Police have so far investigated more than 20 people in connection with the disaster and booked 14 of them, including HDC's on-site officials and officials from demolition and supervision companies, as suspects. They did not rule out the possibility of some HDC headquarters officials being booked on charges of professional negligence resulting in death, depending on the results of their analysis of company documents seized in the raid.

In a related development, the Gwangju District Court is to hold a hearing Thursday to determine whether to issue an arrest warrant for the excavator operator, known as the head of Baeksol, and an official in charge of safety of the dismantling work.