BARCELONA, June 17 (Joint-Press Corps-Yonhap) -- South Korean President Moon Jae-in headed back to Seoul on Thursday after a weeklong trip to Europe, during which he focused on making clear Seoul's commitment to playing a bigger role in global issues and improving strategic ties with Austria and Spain.

He joined a Group of Seven (G-7) summit in Cornwall, Britain, last weekend as a guest.

Moon received an invitation to take part in last year's G-7 summit, scheduled to be hosted by the U.S., as well but it was called off due to the pandemic.

"The G-7's invitation for the second consecutive year is seen as reflecting a consensus among major G-7 members, including the U.S. and Britain, that South Korea's participation is crucial," a senior Cheong Wa Dae official told reporters.

Moon attended expanded plenary sessions on health, open societies and climate. He also had a series of one-on-one talks with his Australian, German, British, French and EU counterparts.

By playing a "substantive role" and making a contribution to global efforts to resolve such pending issues, the president has broadened "our diplomatic horizons by a notch," the official added.

Moon used his first trip to Europe amid the coronavirus crisis for "vaccine diplomacy" as well by meeting in person with AstraZeneca's CEO Pascal Soriot in the British county. He then spoke via video links with German biotech group CureVac's CEO Franz-Werner Haas about South Korea's bid to become a global vaccine production hub.

In the G-7 session on health, he unveiled Seoul's plan to offer US$100 million in grants this year for the COVAX Advance Market Commitment (AMC), designed to help developing and poorer nations gain vaccine supplies. Moon also said that Seoul would provide cash or materials worth $100 million in additional aid next year.

Moon is emboldened by a recent White House summit deal with U.S. President Joe Biden on a "comprehensive global vaccine partnership" between the allies. 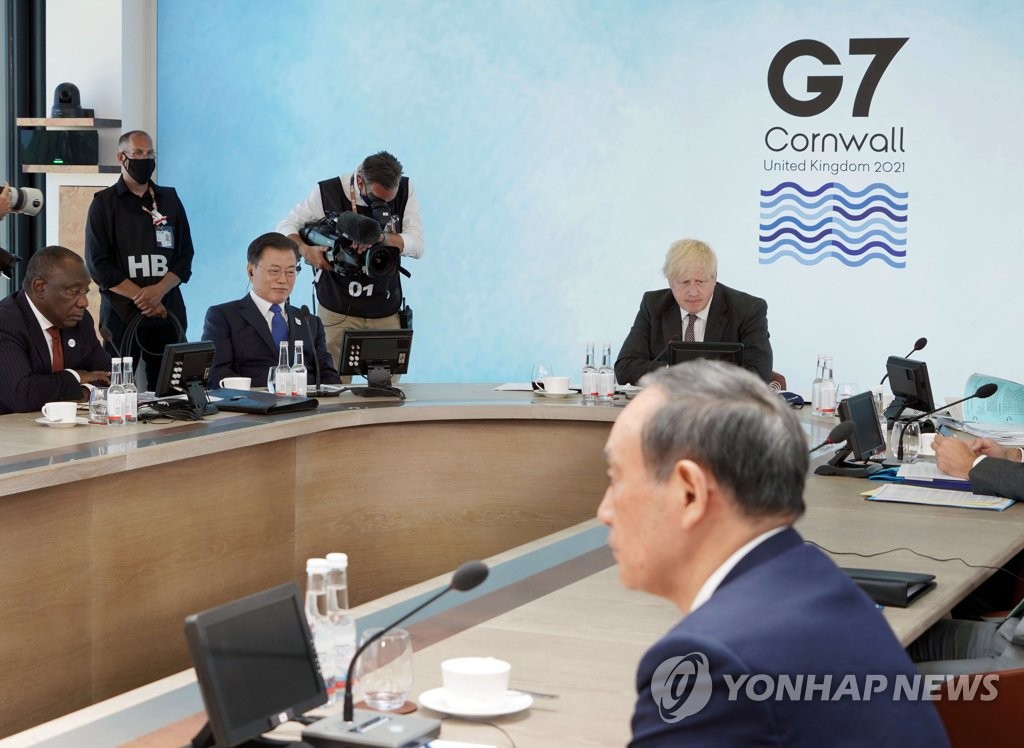 Moon sought formal bilateral talks or a "pull-aside" informal meeting with Suga on the sidelines of the G-7 summit. But Suga reportedly shunned a separate meeting with Moon.

"The first encounter with Prime Minister Suga was a valuable time that may lead to a new start in South Korea-Japan relations," Moon wrote on his social media accounts, leaving Britain on Sunday.

He expressed regret that talks with Suga were not held in the end.

It remains uncertain whether Moon will attend the opening ceremony of the Tokyo Olympics slated for late July.

Cheong Wa Dae said South Korea will continue dialogue and consultations with Japan "with an open attitude" for the sake of a "forward-looking" improvement in bilateral ties.

Another dilemma for Seoul is Beijing's overt concerns about its strategic stance between the global superpowers. China suspects that the G-7, which consists of the U.S. Canada, France, Germany, Italy, Japan and Britain, is attempting to form a broader coalition against it.

It means increased urgency for South Korea to arrange Chinese President Xi Jinping's agreed-upon visit to the country, postponed due to COVID-19.

The two sides are in continued consultations on the issue of Xi's trip, according to the Cheong Wa Dae official, who spoke on the customary condition of anonymity.

Related discussions are expected to "be specified" in accordance with changes in the coronavirus situations, he said.

"South Korea maintains a position to simultaneously strengthen its strategic alliance with the U.S. and develop its strategic cooperative partnership with China," the official pointed out. 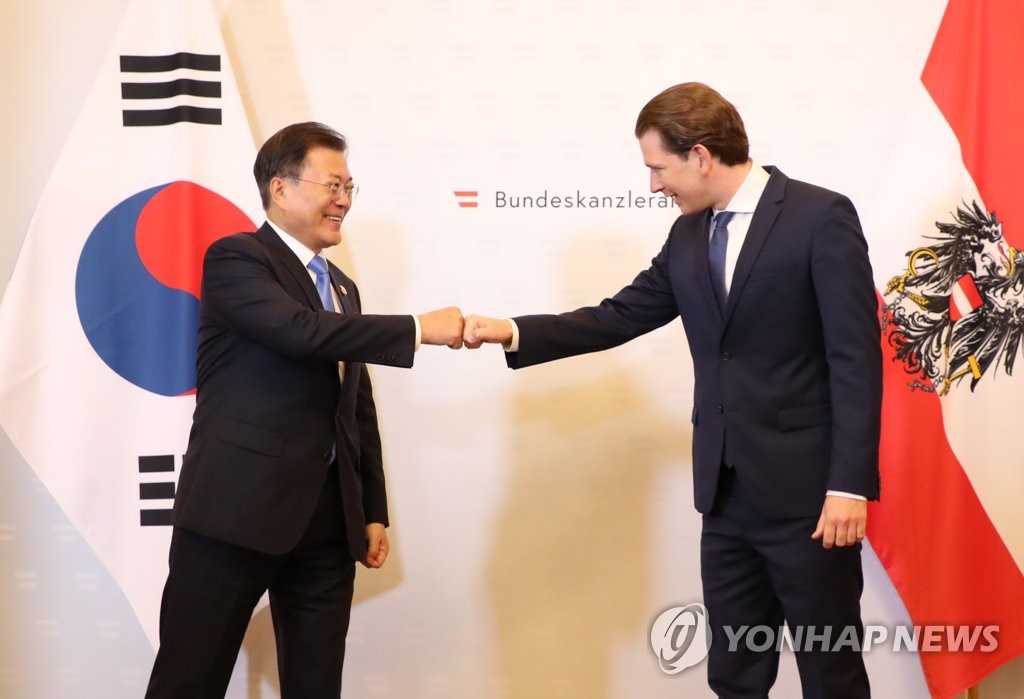 Following his attendance of the G-7 summit, Moon flew to Austria for a three-day state visit. A trip by South Korea's president there had been unprecedented since the establishment of bilateral diplomatic ties in 1892.

He had a summit with Austrian President Alexander Van der Bellen in Vienna. Holding a joint press conference, Moon extended another overture toward North Korea. South Korea will push proactively for cooperation with North Korea on COVID-19 vaccine supplies if it agrees, he stated.

He then had talks with Chancellor Sebastian Kurz and agreed to lift the level of South Korea-Austria cooperation to a "strategic partnership."

On Tuesday, Moon arrived in Spain also to make a state visit, becoming the first South Korean leader to do so in 14 years.

He was welcomed by King Felipe VII at the royal palace of Madrid and held talks with Prime Minister Pedro Sanchez, in which they agreed to upgrade their countries' relations to a strategic partnership.

Moon emphasized great potential for the expansion of the two sides' partnerships, especially on the low-carbon and digital economy, as they have complementary businesses with strengths.

Moon attended the opening dinner of an annual Spanish economic forum in Barcelona along with the king. 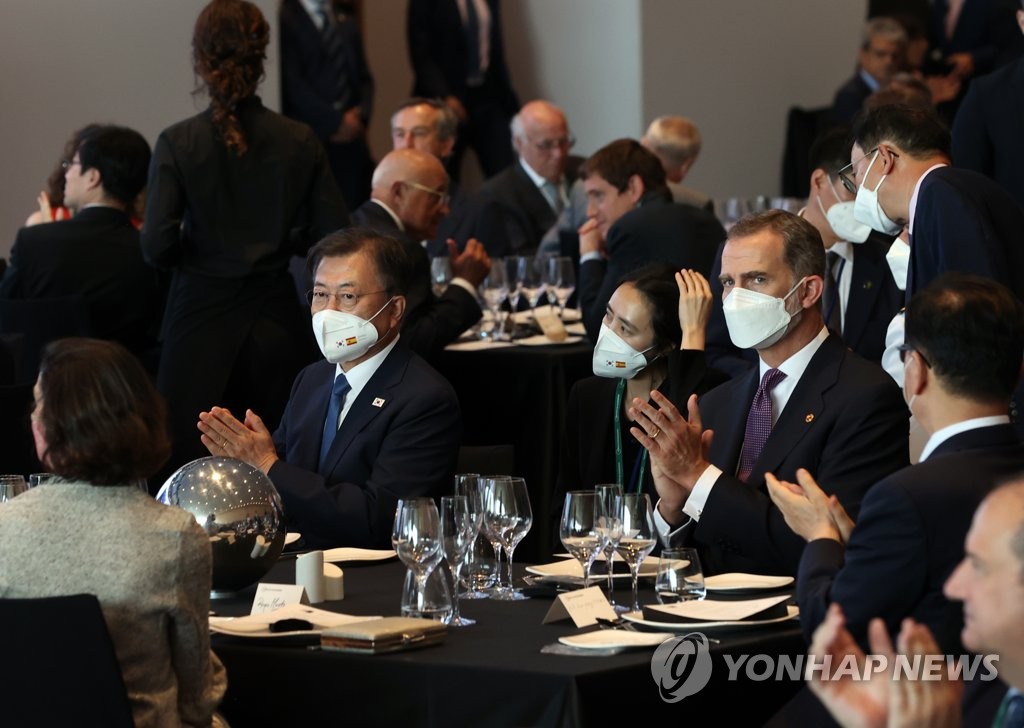 There had been no specific diplomatic jargon to describe South Korea's bilateral relations with either Austria or Spain.

The elevation of the relationship status is aimed at bolstering "overall" bilateral cooperative ties with the two European nations, a stepping stone for close cooperation in overcoming the pandemic and preparing for the post-coronavirus era, Cheong Wa Dae said.

The president's Europe trip has served as a chance to "confirm a change in South Korea's stature through the eyes of other nations," it added.
(END)