SEOUL, June 17 (Yonhap) -- Former Prime Minister Chung Sye-kyun on Thursday announced his intention to run for president next year, promising to become a leader to build a strong economy and stamp out inequality.

Chung launched his bid for the nomination of the ruling Democratic Party (DP) under the slogan of "Strong Korea, Economic President."

"I will be an economic president of a strong Republic of Korea, who fights all inequalities," he said during an event in Seoul to kick off his candidacy.

"If I can heal wounds of the people and eradicate all gaps caused by unfairness and inequality, I am willing to devote all my life lived and the rest of my life," he said.

He is expected to face an uphill battle to win the DP ticket, as he comes in a distant third among DP hopefuls after Gyeonggi Province Gov. Lee Jae-myung and former Prime Minister Lee Nak-yon.

In a survey conducted this week and released Thursday by four pollsters, Chung ranked sixth with support of 1 percent along with four other minor potential candidates. Lee Jae-myung led the poll with 25 percent, closely followed by former Prosecutor General Yoon Seok-youl.

Chung, 70, considered a moderate, was appointed prime minister in January 2020 and led the nation's response to the coronavirus pandemic. He resigned in April to prepare to run in the presidential election to be held in March next year.

The businessman-turned-politician was a parliamentary speaker during the impeachment of former President Park Geun-hye in 2017 over a massive corruption scandal.

Born to a poor family in the southwestern county of Jinan in 1950, he worked for a general trading company under Ssangyong Group for 17 years.

He entered politics in 1995 and was elected to the National Assembly six times. He served as industry and energy minister in 2006 under then President Roh Moo-hyun and headed the then ruling Uri Party, the forerunner of the DP, two times between 2005 and 2007.

He is nicknamed "Mr. Smile" for his gentle demeanor. He is known for balanced views and a stable style but also showed strong leadership when he steered a nationwide drive to curb COVID-19 as prime minister. 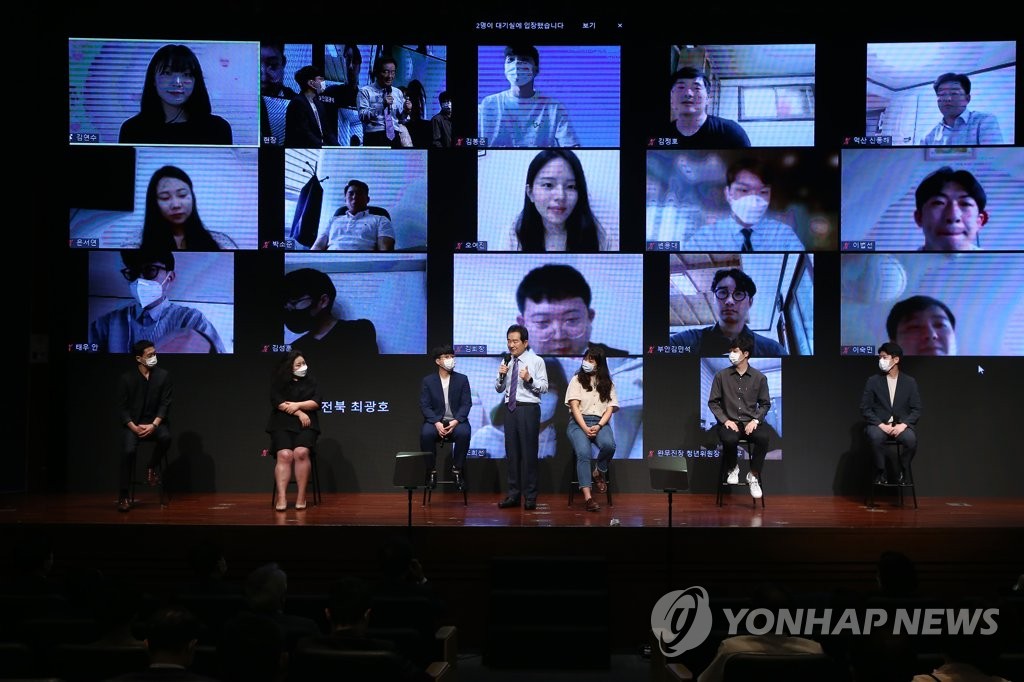 During the event, he focused on his economic vision to achieve US$40,000 income per capita and reduce income inequality.

He proposed a social compromise that calls for freezing dividends for large shareholders of conglomerates and salaries of their executives and workers for three years, and instead increasing their subcontractors' product prices and wages.

The ceremony was held as a talk with youths, reflecting the increasing power of young voters. It was also attended by about 40 lawmakers, including Lee Nak-yon and Chung's other potential rivals in the DP primary.
(END)