Kim Jin-wook, the head of the Corruption Investigation Office for High-ranking Officials (CIO), said at a press conference that while the CIO has started working on the case, it has yet to launch a full-fledged investigation because of various circumstances.

Last week, the CIO said it has opened a case on accusations against Yoon in connection with two high-profile criminal cases.

The former prosecutor general is accused of abusing his power to stop an investigation into the massive financial fraud case at Optimus Asset Management. He also allegedly interfered with another investigation into prosecutors who were accused of forcing prison inmates to make false testimonies against former Prime Minister Han Myeong-sook in 2011. 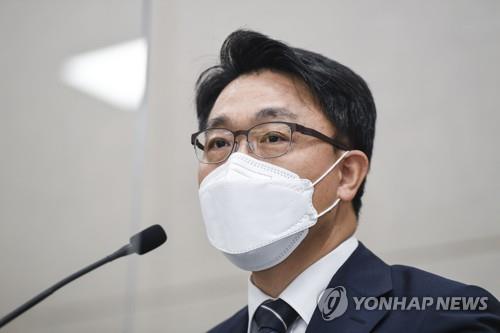 Kim said there were no ulterior motives behind the investigation into Yoon, who has emerged as one of the strongest and most popular presidential candidates from the conservative bloc. Yoon has not officially announced a run for the presidency.

Kim stressed that the agency is different from the prosecution, in that there is the additional step of studying a case before launching an investigation in earnest, so that opening a case does not necessarily mean that those accused become suspects.

Asked if the investigation into Yoon could amount to stepping onto a political minefield given his popularity, Kim said, "It is hard and not desirable to avoid politically sensitive cases under the premise of keeping political neutrality."

"I have no intention to influence (the election), and as chief of an investigative agency I will prove that such concerns are groundless," he said.

The agency will end the investigation into Yoon before the March election, he also said, adding that "Choosing a case has nothing to do with political considerations or events, but it follows legal judgments and due investigative process."

He also defended the ongoing investigation into favoritism allegations against Cho Hee-yeon, superintendent of the capital city's education office, the first case of the agency that began operations in January.

According to Kim, Cho was reported to the CIO on abuse of power allegations and to the police with a violation of the State Public Officials Act at the same time, and the CIO decided to open the case with more serious allegations.