A closer look at the paintings -- which seem like flat, pointillist pieces on paper or a computer screen -- bulge with transparent dots that the Australian artist applies one by one using glue, giving the artworks a three-dimensional feel.

These protruding dots, or "lenses," are a key technique the Australian artist incorporates to enable viewers to explore the numerous topics he works on ranging from his family roots to Australia's history. "The surface is made up of all these convex dots that sit on the surface and they act as lenses, so it's about perception and how we collectively understand something," he said in an interview shot in line with his solo exhibition "Treasure Island" taking place at Kukje Gallery in central Seoul.

In contrast to the lenses that fill the artworks, the negative spaces in between these dots symbolize a lost history or knowledge. By connecting the dots and seeing beyond what is portrayed, Boyd takes viewers through individual journeys that transcend time and space and questions established notions of history.

"It is trying to create a situation where you have to acknowledge the space between yourself and the other and your relationship to the other, but in acknowledging difference and celebrating difference," he said. 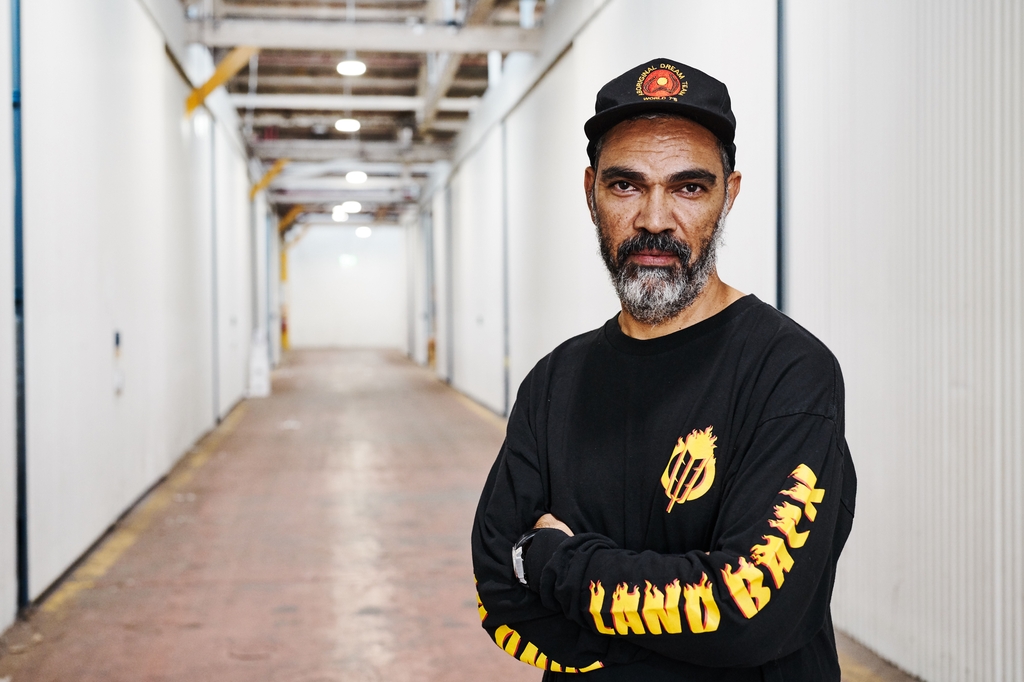 In this sense, the signature technique is an effective means in taking in Boyd's key artistic themes that are largely based on history. However, rather than taking a macroscopic approach to such a topic, he turns the lens to his family and ancestors who had been marginalized in Western narratives of Australian history.

The work "Untitled (GGASOLIWPS)," for instance, portrays his great grandfather, Harry Mossman, on the Great Barrier Reef Expedition. Mossman was part of the "Stolen Generation," in which Aboriginal children were forcibly separated from their families under government law.

In "Untitled (TDHFTC)", he shows his sister preparing for a traditional dance performance, a cultural heritage that has been passed down with some updates and changes throughout colonial history. 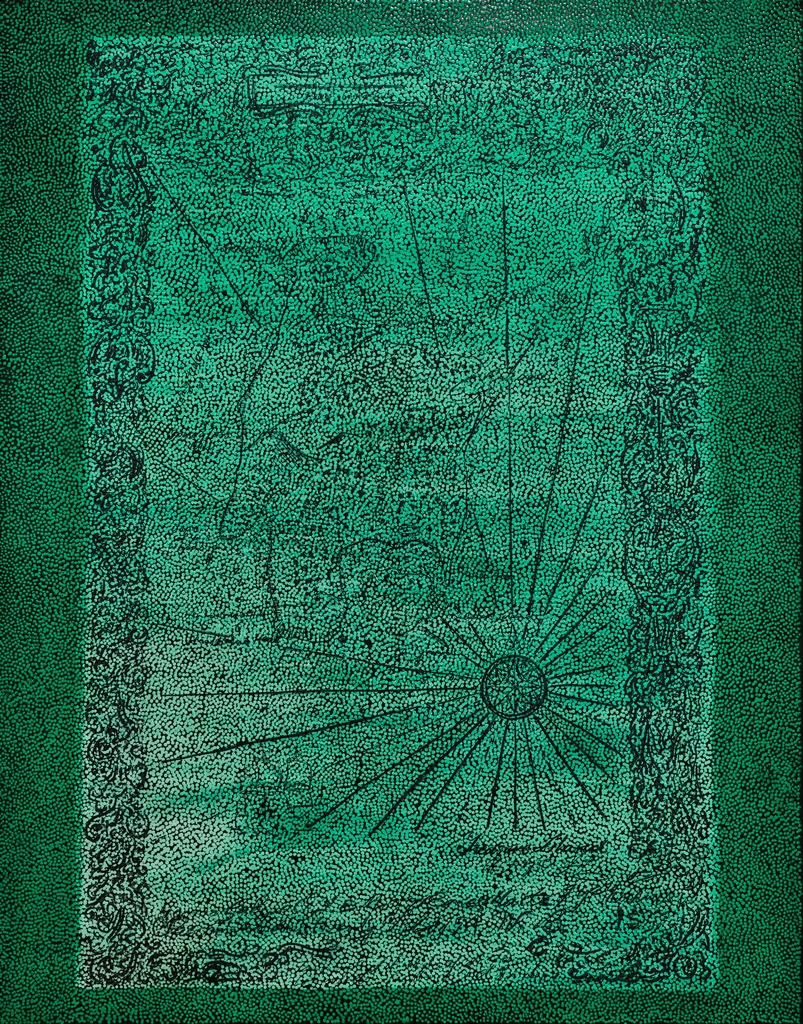 In addition to taking cues from his family and roots, Boyd also plays with literature, film and music in popular culture, as well as historic but mundane objects like dinner plates.

Among the 25 works on view, a large portion of them are linked to icons of popular culture, such as Scottish novelist Robert Louis Stevenson's "Treasure Island" and the 1962 film "Mutiny on the Bounty."

"I kind of want to show a translation of this navigation chart that he owned to the map that he drew for the novel 'Treasure Island' -- so there is a map of 'Treasure Island' from his novel -- as a way to kind of continue that idea of mapping and authorship you known, controlling a certain narrative through cinema or literature," he said.

In this way, Boyd questions the Western gaze on historic topics by applying his signature convex dots on a recreated map of 'Treasure Island' or a movie poster for the film that is based on the 1789 incident of a mutiny on the vessel HSM Bounty.

He also draws on everyday objects and explores their historic context and its changing implications as seen in paintings of a dinner plate that Stevenson actually used. 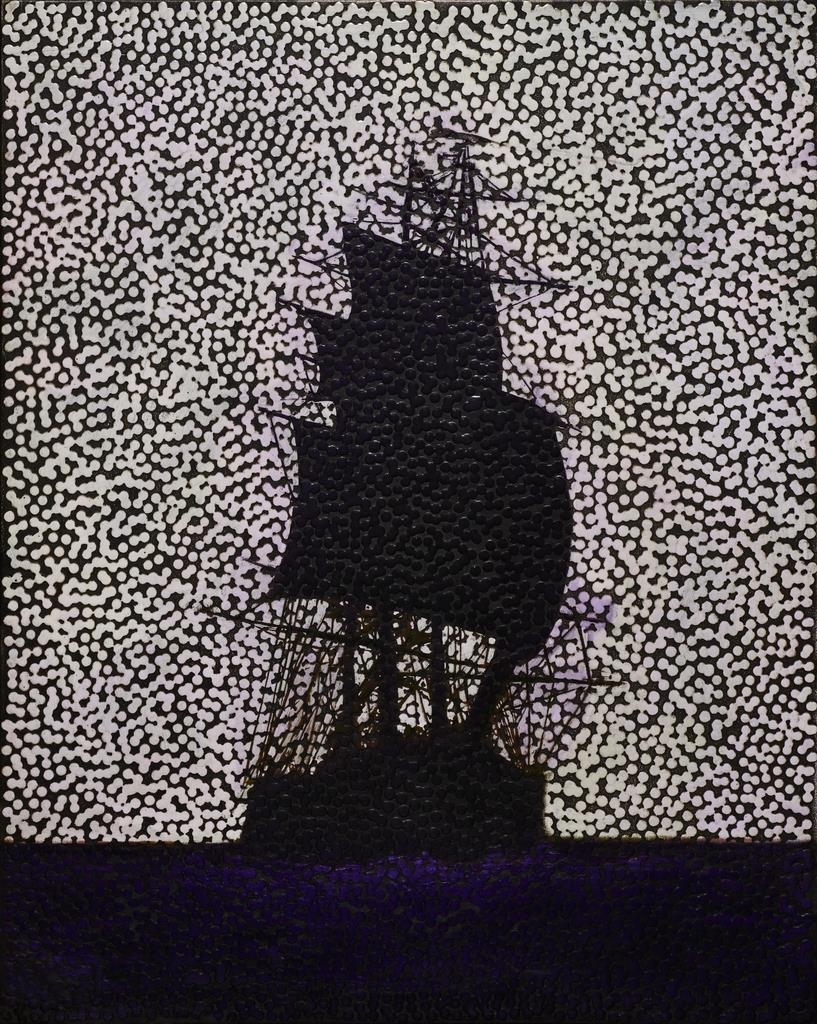 Whether they are figures from his family tree or fictional figures from popular works, Boyd consistently urges viewers to see them through different and individual lenses that are physically created through the clear, convex dots.

"The way they were historically represented is important to how we understand our relationship to people and places," Boyd said.

The exhibition runs until Aug. 1.