SEOUL, June 18 (Yonhap) -- Brave Girls, a girl group that rose to surprise stardom at the brink of disbandment, said it wishes to become the new summer queen of the K-pop scene with its latest release.

"We would like to become a group people think of when summer comes," the group said during a news conference held Thursday marking the release of its fifth EP, titled "Summer Queen."

The five-track album, including Korean and English language versions of the main track "Chi Mat Ba Ram," is full of tropical sounds and upbeat rhythms.

"Chi Mat Ba Ram" -- a compound of the words "chima," which means skirt in Korean, and "baram," which means swish or wind -- tends to be used negatively, referring to fierceness in women, especially moms taking care of their children.

"We were confused at first when we heard about the title of the main track but understood our chief producer's intention when he said he chose the word in hopes Brave Girls would take the K-pop scene by storm," the group's main vocalist Minyoung said.

The summer tropical number was written by Brave Brothers, one of the most successful K-pop producers and the chief of Brave Entertainment, which represents the four-piece act. 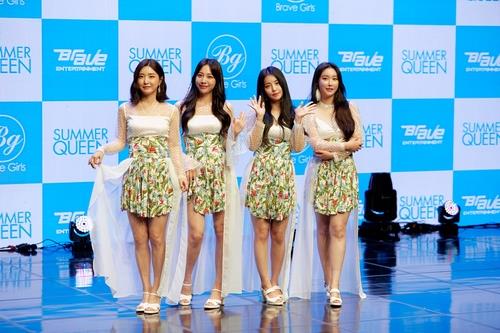 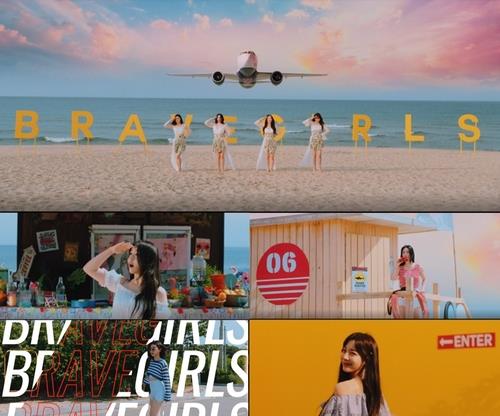 Until early this year, the band's four members -- Minyoung, Yujeong, Eunji and Yuna-- were considering parting ways after their past releases failed to grab the public's attention in the highly competitive industry where many acts come and go quickly.

But things changed after a three-minute clip, showing the girl group performing its 2017 song "Rollin'" at various concerts for the Army, the Marine Corps and the Air Force, went viral on YouTube.

"We had no work up until three months ago. It would be a lie if we were to say we did not feel immense pressure from all the attention, but we put a lot of effort into this album," Yujeong said.

"It would be great if we could see an immediate response for our song this time because we worked really hard," Eunji said, adding that she almost broke into tears watching the new song's music video for the first time. "We feel so grateful. We had such a hard time reaching this state," she added, reminiscing about the time the group spent in obscurity.

Minyoung said the latest album captured the color of the group that the public wants the most, voicing hope that people will receive positive energy listening to their songs.

Launched in 2011, Brave Girls has seen all of its original members leave the group over the years. The current members joined the team in 2016.