TOKYO, June 18 (Yonhap) -- Organizers of an exhibition showcasing a statue symbolizing Japan's sexual enslavement of women from Korea and elsewhere in Asia said Friday they will push ahead with the event as planned despite opposition from right-wing activists.

The exhibition, scheduled to take place from June 25-July 4, was on the verge of being canceled after protestors used loudspeakers and cars to disrupt the event and forced organizers to change the exhibition venue.

Without elaborating on the venue, citing security concerns, organizers said they have secured a new spot for the event and will kick off the exhibition as planned. The location will be announced prior to the event, they added.

The upcoming event will feature artworks that had been on view at the exhibition "After 'Freedom of Expression?'" as part of the Aichi Triennale 2019 in Nagoya two years ago. The event was temporarily disrupted amid threats from right-wing political groups.

The exhibition will also take place in the Japanese cities of Nagoya from July 6-11 and Osaka from July 16-18. 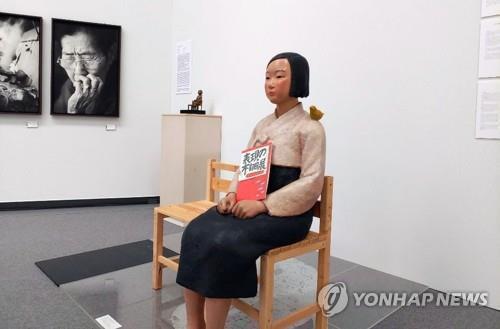 'Peace statue' exhibition to open in Tokyo as planned

'Peace statue' exhibition to open in Tokyo as planned