According to the Seoul metropolitan government, the ABB FIA Formula E World Championship, an annual motor racing championship for electrically powered vehicles, will take place in and around the Jamsil Sports Complex in southern Seoul from Aug. 13-14 next year.

The championship, dubbed "Formula E," is an event organized by the International Automobile Federation (FIA) and has been held every year since 2014 in major cities around the world, such as New York, London and Paris. 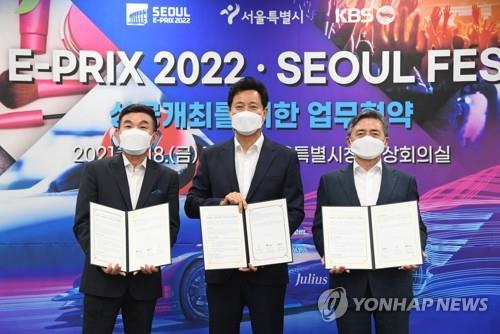 The Seoul championship, titled "Seoul E-Prix 2022," will be the final competition of the 2021-2022 season. World-class automakers, such as Mercedes-Benz, Porsche and BMW, are scheduled to form teams to participate in Seoul E-Prix 2022.

It will be the first time for Formula E to be held in South Korea. The Seoul championship was originally scheduled to be held in May last year but was postponed due to the spread of COVID-19. The city government expects more than 2,000 people, including drivers and operating personnel, to visit Seoul during the championship.

In time for Seoul E-Prix 2022, the capital's tourism festival, Seoul Festa 2022, will be held from Aug. 10-14 to help create synergy between the two events, the government said.

K-pop boy band BTS, which doubles as an honorary ambassador for Seoul tourism and a global ambassador for Formula E, is also expected to help promote the Seoul championship, it said.

"Seoul E-Prix 2022 is the most efficient event to attract people and money from all over the world. The Seoul government will spare no effort to make the expected economic effects from the two events even greater," Seoul Mayor Oh Se-hoon said.