Trading volume was moderate at about 1.6 billion shares worth some 17.1 trillion won (US$15.1 billion), with losers outnumbering gainers 464 to 382. 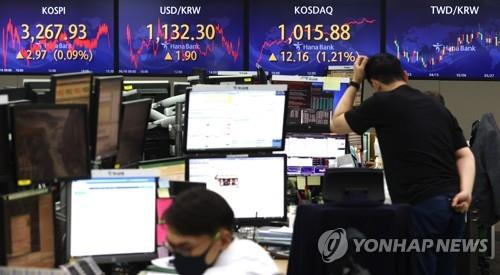 The KOSPI snapped its five-session winning streak the previous day.

Stocks traded choppy in course toward the session's close but managed to finish higher.

The local currency closed at 1,132.3 won against the U.S. dollar, down 1.9 won from the previous session's close.

Bond prices, which move inversely to yields, closed higher. The yield on three-year Treasurys lost 1.4 basis points to 1.313 percent, and the return on the benchmark five-year government bond fell 3.2 basis points to 1.678 percent.