During a plenary party meeting earlier in the day, the DP won its lawmakers' endorsement through online voting for its plan to push for the tax cuts, according to party officials.

The DP has been under pressure to address growing public discontent over the overheated real estate market after runaway house prices drove up tax burdens on home owners while raising costs for home lenders.

The housing market issue has been widely blamed for the DP's crushing defeats in the Seoul and Busan mayoral elections in April.

Under the new policies, the lowest limit for levying the Gross Real Estate Tax, a special tax imposed on owners of multiple or high-end houses, will be raised to some 1.1 billion won (US$973,020) from current 900 million won. The tax cut will benefit owners of a single home only.

According to party officials, the portion of homeowners to be levied with the Gross Real Estate Tax under the new policies will be reduced to top 2 percent of the total.

Under the decisions, the benefit of the Real Estate Transfer Tax exemption will also be extended to homes worth up to 1.2 billion won, from the current standard at 900 million won, the DP also noted.

"The (internal) controversies over the two real estate issues have been settled. The decisions will be pushed for through the DP's bills (on revising related laws)," Rep. Koh Yong-jin, the party's chief spokesman, said.

The ruling party can pass a bill without difficulty as it commands a parliamentary majority with 174 out of 300 seats.

The decisions mark the latest in a series of real estate-related tax cuts the ruling party has introduced as it seeks to win back voters' support following its election defeats as well as ahead of next year's presidential election.

In another major decision last month, the DP also extended the benefit of the 0.05-percentage-point property tax cut, currently available for houses worth 600 million won or less, to houses worth up to 900 million won.

The package of new policies faced backlash from some hardline members who denounced them as "tax cuts for the rich." 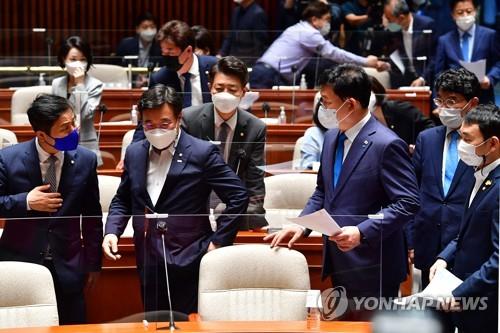