SEOUL, June 19 (Yonhap) -- Soldiers and equipment of a U.S. armored brigade combat team have started to arrive in South Korea for a rotational deployment, the U.S. military said Saturday.

Tracked vehicles and other equipment of the Bulldog Brigade, 3rd Armored Brigade Combat Team of the 1st Armored Division, began arriving in the southern port city of Busan from Fort Bliss, Texas, earlier this month, according to the Eighth Army.

The arriving brigade is replacing the 1st Armored Brigade Combat Team of the 3rd Infantry Division from Fort Stewart, Georgia, which has been on a nine-month rotational deployment in support of 2nd Infantry Division, South Korea-U.S. Combined Division and Eighth Army, it said.

The Bulldog Brigade is the 10th rotational armored brigade to serve in Korea.

"The introduction of off-peninsula units to Korea exposes U.S. soldiers to the operating environment in the ROK, expands and enhances the partnership between the two armies, and supports the ironclad ROK-U.S Alliance," it said in a release. ROK is short for South Korea's official name, the Republic of Korea.

All soldiers upon arrival will be tested for the new coronavirus and put into 14-day mandatory quarantine.

About 28,500 American troops are stationed in South Korea to deter North Korean aggression, a legacy of the 1950-53 Korean War, which ended in a truce, not a peace treaty, leaving the divided peninsula still technically at war. 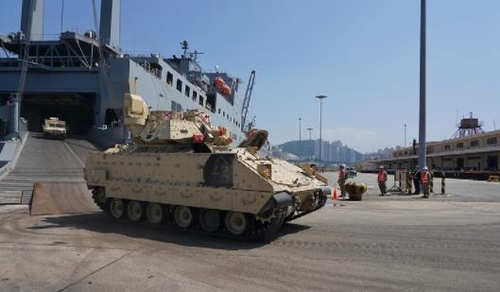