Kim and members of the Workers' Party's central leadership attended the performance by the Band of the State Affairs Commission, the North's official Korean Central News Agency (KCNA) reported without specifying when the event took place.

From Tuesday through Friday, the North held the third plenary session of the eighth Central Committee of the Workers' Party to discuss economic challenges, including food shortages and anti-pandemic efforts.

Kim also discussed how to deal with the administration of U.S. President Joe Biden, saying his country should be ready for both dialogue and confrontation, and more importantly, confrontation amid the "fast-changing" situation on the Korean Peninsula.

Wrapping up the meeting Friday, Kim said that his party will "break through head-on the difficulties lying in the way of the revolution" and remain "loyal to the revolutionary idea to the end regardless of the severer difficulties it may be confronted with in the future," the KCNA reported the following day.

Meanwhile, the Rodong Sinmun, the daily of the ruling party, on Sunday carried an article stressing the importance of stabilizing people's livelihoods, as it introduced Kim's remarks during the recently concluded party meeting.

The article also emphasized the need to repay "people's trust and expectations" by making notable achievements on a path to the improvement of their livelihoods. 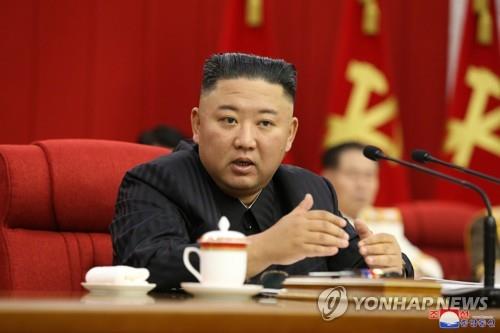