In the Realmeter survey of 2,514 voters nationwide conducted from Monday to Friday last week, the PPP garnered 39.7 percent of support, up 0.6 percentage point from the previous week.

It marks the third week in a row that the public support rating of the biggest conservative party has gained ground. The latest weekly growth put the PPP's approval rating at the highest level in Realmeter polls since the party took a debilitating blow from the corruption scandal in 2016 involving the impeached former president, who was once the head of the party.

The previous high was 39.4 percent, registered right after the PPP won a landslide victory in the Seoul and Busan mayoral by-elections on April 7.

The ruling Democratic Party, meanwhile, saw its approval rating edge up by 0.2 percentage point to 29.4 percent in the latest Realmeter poll.

The minor opposition People's Party came in third with a 6.7 percent support rating, followed by the Open Democratic Party at 5.7 percent and the Justice Party at 3.5 percent.

Realmeter said the PPP's approval rating rose in reflection of expectations for its young new chief Lee Jun-seok. But the party fell short of surpassing the 40 percent mark due to Lee's controversial appointment of Rep. Han Ki-ho as its new secretary-general. Han has been criticized for his comments implying that North Korea was involved in the 1980 pro-democracy uprising in Gwangju. 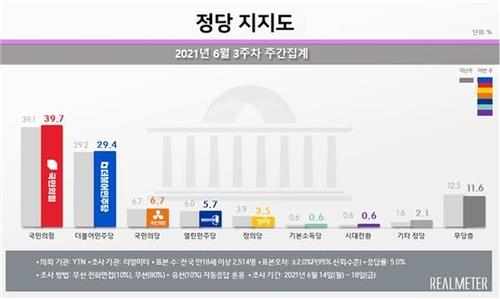 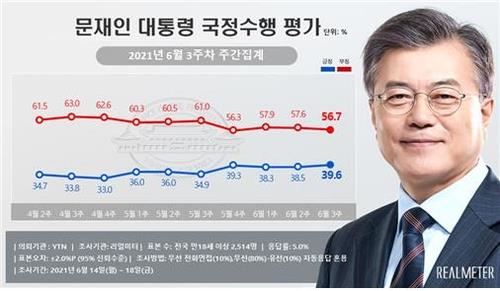 The negative assessment of Moon's performance was down by 0.9 percentage point to 56.7 percent.