SEOUL, June 21 (Yonhap) -- The value of household chores grew nearly 36 percent in 2019 from five years earlier, with men's participation in such work rising amid an increase in one-person households and double income families, data showed Monday.

The value of household work, such as child care, meal preparations and cleaning, came to 490.9 trillion won (US$433 billion) in 2019, compared with 361.5 trillion won in 2014, according to the data from Statistics Korea.

The 2019 figure was equivalent to 25.5 percent of the country's nominal gross domestic product. This compared with the 23.1 percent portion seen in 2014. 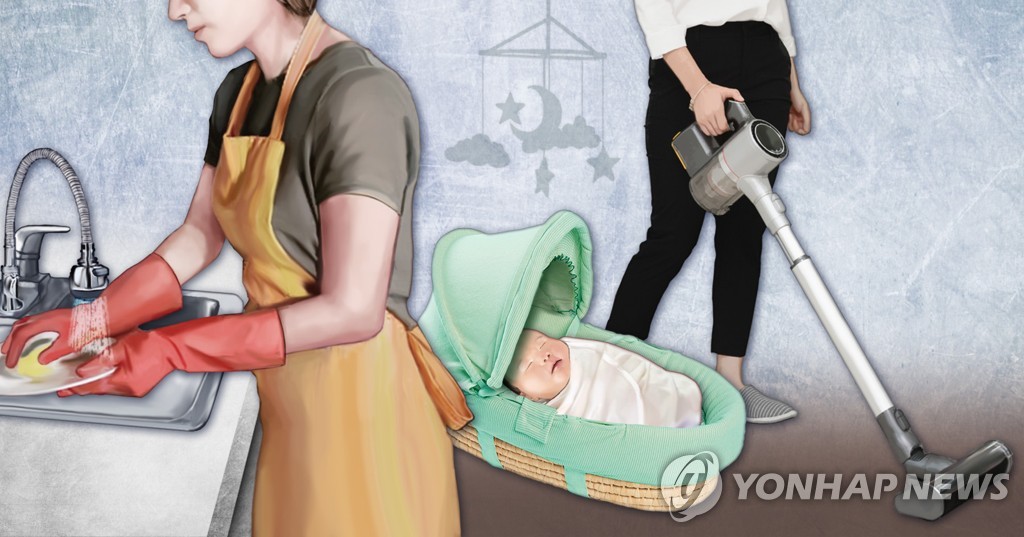 Unpaid chores at home, calculated as the so-called household satellite account, assess the value of services and activities at home by family members without transactions with markets.

Maintaining a home, ranging from preparations for meals to cleaning, accounted for 66.6 percent of the unpaid work. Of them, the value of taking care of pets and plants reached 14.5 trillion won, sharply up 111.2 percent from 2014.

The portion of looking after family members reached 22.1 percent, with the value of taking care of young children growing 16.9 percent to 101 trillion won.

By gender, men's participation in household chores has been on the rise as the number of one-person households and double income families has increased, according to the statistics agency.

Despite men's increased participation in household chores, the value of such work provided by women accounted for 72.5 percent of the total in 2019.

The data showed that the value of home chores per person was 9.49 million won in 2019, up 33.3 percent from five year earlier.